Skip to content
Home » Songtress Kelis Should Not Be Slept On 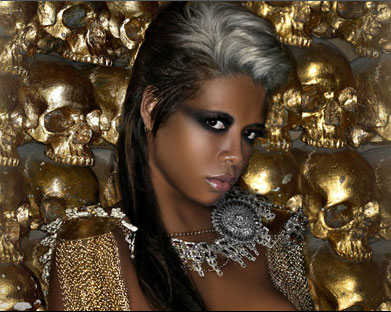 Before Lady Gaga took charge of the music industry using her excess amounts of creative songwriting brilliance, avant-garde attire, and slight suggestions of insanity, there was Kelis Rogers. Though her credentials may not include four, successive number one singles like Gaga, Kelis’ automated-like alto, eccentric fashion style, and colorful music videos made way for “the cool, weird girl” singer-types of the past decade.

Her debut album Kaleidoscope was a full-on product of adventurous, musical duo The Neptunes and made moderate impact on the charts. Lead single “Caught Out There” was the album’s standout track, and introduced the world to the angry, psycho singer who chose to scream her way through an entire song. Kelis’ unique vocal delivery worked to her advantage and created a bizarre take on a traditional ladies’ anthem. Radio attention came next and quickly caused cases of sore throat after scorned women everywhere did their take on what is perhaps one of the most simple, bitterly bright hooks of all time: “I hate you so much right now!” After the eerie, funky, Hype Williams-directed music video was released, Kelis’ popularity was established, and her sanity questioned.

Sophomore effort Wanderland did nothing to propel her from one-hit wonder status and was ultimately ignored by listeners, producing not one successful single. Artistically recharged, Kelis released her third studio effort Tasty in 2003, where it immediately attained international success. “Milkshake,” Tasty’s first single, saw the most success, taking Kelis all the way to number three on the Billboard Hot 100 and even further on the UK Single Charts. Listeners everywhere were once again treated to another sweet, slightly twisted chorus from Ms. Rogers, this time a boastful metaphor about her abilities that “bring all the boys to the yard.”

The music video featured rapper Nas and confirmed rumors of the two’s courtship. After enjoying Tasty’s success, and a Grammy nomination for “Milkshake”, Kelis and Nas took their relationship to the next level and married in 2005, with the bride wearing a daring, green-tinted wedding dress. Kelis’ follow-up album, Kelis Was Here, came in 2006 and once again, succeeded in infecting listeners’ ears with an innovative hit, although there were no traces of usual suspects The Neptunes to be found on either the Too Short-assisted single “Bossy” or the rest of the album. The “Bossy” music video showed Kelis trade her signature, curls-of-color afro for a sleek bob cut much like the same haircut that would later be attributed for Rihanna’s transformation from reggae, pop star-hopeful to international music superstar.

The time Kelis would spend away from music afterwards would prove challenging. In March 2007, after an odd incident involving undercover police officers dressed as prostitutes, Kelis was arrested in Miama, Florida for disorderly conduct. She was acquitted a year later. Later, in 2009, the singer filed for divorce from husband Nas, despite being heavily pregnant at the time. Legal battles would ensue after the sour split, but would finally end with a baby boy named Knight and his mother receiving $55,000 a month in child and spousal support.

Though the past few years seem to have clouded the colorful artist that fused naughtiness with cleverness, it should never be forgotten who really was “the first girl to scream on a track” before Beyonce recorded “Ring the Alarm.” With a comeback record in the making, titled FleshTones and a promising single (“Acapella”) produced by in-demand producer David Guetta floating around, 2010 is not the year to still be sleeping on Kelis.