Rico Love: Singer, Songwriter Extraordinaire
Rico Love’s passion for music and songwriting is driven by his unique experiences and musical inspirations. He has written songs for a plethora of artists and produced a host of hit records that receive continuous spins on radio such as Pleasure P’s “Boyfriend #2”, Mario’s “Thinking About You,” Usher’s “Throwback,” and most recently, “Daddy’s Home (Hey Daddy)” another Usher hit. Parlé caught up with Rico Love to get his take on songwriting and the music scene at large.

Parlé: Where did you grow up and how would you say it influenced you?
Rico Love: I grew up in New York and Milwaukee. I spent time with my dad in New York and my mom in Milwaukee. They were separated. As a kid, you just go with the motions though, it wasn’t really a big deal, but now as I look back on it, it molded who I am as an individual. I am able to appreciate different cultures, different areas in America. It gave me a broader sense of life. I wasn’t in a box.

Parlé: In an interview, you mentioned you were a member of the African American children’s theater; would you speak on your experience?
Rico Love: It was one of the greatest experiences of my life. I got a chance to explore different parts of myself, you know. That’s what acting does. You are able to figure yourself out when you’re being someone else. I learned different facets of who I am. It was very motivational.

Parlé: What drew you to music scene?
Rico Love: It was something that was always in me. It was a part of me. It was easy for me to adapt. I didn’t have to think about music, it just came to me. I cannot remember a time when I said, ‘I’m gonna do music,’ I just did it.

Parlé: Who are some of your music influences?
Rico Love: Marvin Gaye, Miles Davis, Prince, Queen, Elton John, Billy Joel, 2Pac, Jay-Z. I grew up listening to a lot of music. The whole Bad Boy movement motivated me as a kid. My favorite rapper of all time is Biggie.

Parlé: Would you say there was one event or person that propelled you to where you are right now?
Rico Love: Writing “Throwback” for Usher. I feel like that opened the door. I was a rapper at first, and that was the first song that I wrote. Besides God, I owe my career to Usher. He saw something in me. He said you should develop yourself as a writer. He said instead of me just giving you money, you should make a career for yourself. The rest was uphill from there. I got a chance to explore from there. I went on tour with Usher and a lot of people came out to see. I was able to perform in front of people who I looked up to. That was the moment where the door opened for me. It told me that I was bigger than just being a rapper. I was signed to Usher. I had a meeting with him. You know when you get signed, you think you’re gonna get a million dollars and all that. But Usher say yo, I’m gonna help you. Just Blaze produced the beat and Usher asked me to write the song. This is what led to me writing for other artists. People heard of me. It was word of mouth. Every time you do a good record, more people know about you.

Parlé: You’ve also said Jagged Edge was a big influence on you, how so?
Rico Love: I kinda grew up under Jagged Edge when I was in college. This was when I was in Atlanta. I would catch the bus to Atlanta every weekend and they kind of took me under their wing. I would hang out with them. I absorbed everything they did. Their writing style – I kinda formulated my writing style after them. What they do is they hear a beat, they sing a melody and they get in the booth and sing a song off the top of their head. Later on in my career, I noticed that when I’d write songs, I do the same thing.

Parlé: You mentioned that you were a rapper; do you see any difference between writing a rap song versus an R&B song?
Rico Love: There’s a lot more melody involved. Even though hip hop has more melody now, R&B is a lot more detailed and intricate. The arrangements are different. If I knew then, what I know now, I would have been a way better rapper back then.

Parlé: In your bio, it said that you want people to think of you when they think of fashion, what did you mean?
Rico Love: I was saying that in every aspect, fashion is a major part of our music, our sound. It’s who we are as people, especially Black people. I grew up idolizing P. Diddy and when I think of P. Diddy, I think of a mogul. He took hip hop and turned it into a movement. A fashion movement – a cologne and how we smell. I want to be a trendsetter. 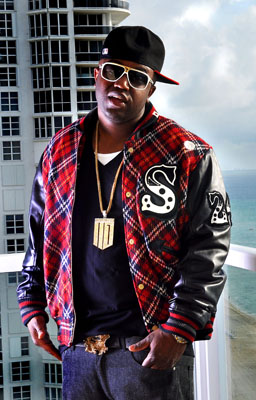 Parlé: Have you worked with Diddy?
Rico Love: Yeah, he’s my friend. I got a call from him awhile back. It was the best thing besides getting the opportunity to write “Throwback” for Usher. It was a blessing. It truly let me know that dreams come true. I ride down the street and hear the radio playing my songs. That’s big, you know. Diddy asks for my advice and all that, that’s big. I feel like I made it now.

Parlé: What projects are you working on now?
Rico Love: I just finished wrapping up Dirty Money with Diddy. I’m working with Jamie Foxx and Pleasure P; I did “Boyfriend #2” for him. I’m in LA right now working on Kelly Rowland’s album. I am also working with Nelly. I’m helping him come up with song ideas. I also wrote a few songs for Usher’s new album and most of Mario’s album. He’s got a single coming out called “Ooh Baby,” that I wrote. I’m staying busy, but I’m also at the same time developing my production company, Division One Productions. I am building a brand.

Parlé: Where do you see the music industry in 5 years time, if you were to make a prediction?
Rico Love: It’s gonna come back full circle. It’s gonna come back to real substance. I love music. I love the variety. The only problem I have with music at this point is that we’re all trying to do the same thing. It used to be that guys from the South would do their music, guys from New York would do their thing, guys from the Midwest and the West Coast would do their music and everything would coexist. There was always one area that would dominate, but still they would coexist. Now, there is a lot of imitation. People see Soulja Boy’s success and they try to emulate his sound. Instead of us trying to do our own thing and create our own sound, we are trying to be like everybody else. I feel like it’s gonna come back to people making records and saying ‘I’m creative, I did my own thing.’ People are going to want music again. It’s available because of the Internet, I think we take it for granted. Back in the day, we couldn’t wait for a single to come out on Tuesday at Sam Goody for $1.99. Now, kids aren’t even anxious because they can go online and get it. We’re gonna have to put our heads together to make them want music again. Music is powerful, it’ll never die.

Parlé: What is one thing you want people to take away from this interview?
Rico Love: I want people to look out for a lot of the songs on the new Usher album. He gave me my start. I just want people to know who I am. I love music. I want people to acknowledge what I do. I respect the art form. I’m trying to better myself and progress myself. I surround myself with people who can believe that they can be something that seems unattainable. That’s the secret to success to me and tell everyone to follow me on Twitter at IamRicoLove.