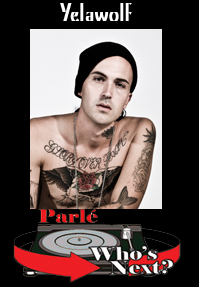 When it comes to the rap game, it’s important for any artist to establish themselves apart from their peers, but the downside to being a white rapper in a predominately black industry is that the comparison to other artists are limited. This doesn’t seem to be the case for up and coming rapper Yelawolf. This skateboarding Alabama-Native knows that being white in this industry means that he has to go hard or go home.

For those of you who have heard Slim Thug’s “I Run,” Yelawolf did the hook for that song. He’s also earned much acclaim and a good fan base via his MySpace page and his downloadable mixtape albums including the newest entitled Trunk Muzik. In my interview with this raising star, I found out what separates Yelawolf from the rest of his peers.

Parlé: Can you give a little background info for those who may not know who you are and what you’re about?
Yelawolf: I’m from Gadsden, Alabama—I was born in Gadsden, Alabama then I stayed in Nashville Tennessee for a while. I moved around a lot as a kid and I went to like fifteen different schools. I grew up on old school rock then I found Hip-Hop. As I got older, I started to skateboard and write; soon I was inspired towards music.

Parlé: What inspired you to get into hip-hop and the music industry?
Yelawolf: My mom’s boyfriend was touring with Aerosmith during the “Walk This Way Tour.” He brought me back some of the Beastie Boys tapes and at the time, this was the first time I heard them and Hip-Hop, but I didn’t know it was Hip-Hop because it sounded so much like Rock to me at the time. It wasn’t until I moved to Nashville that I learned about the culture of it, so I started writing. When I was 19, I was in Berkeley, California I had already started my skateboarding career, I decided that I wanted to pursue music as a career opportunity. I did a bunch of gigs while I was shopping my tapes to independent companies around trying to get signed. I lucked up and got in touch with K.P. who was partners with L.A. Reid and he runs Ghet-O-Vision Records; they’re responsible for signing T.I., Outkast, Pink and a bunch of others.

Parlé: I’ll admit that I wasn’t too familiar with you so I looked you up on YouTube and I really liked your song “Good To Go” with Bun B, can you tell us about the artists you’ve worked with as well as ones you’d like to in the future?
Yelawolf: I appreciate that man. Ugh, I’ve had a lot of ideas for future collaborations. I would like to work with Eminem, Busta Rhymes, Three-6-Mafia especially Juicy J, Carrie Underwood, and Dolly Parton I’m trying to do some genre bending records in the future. I’m just getting started right now so who knows as far as the collaborations I’ve done so far I’ve worked with Bun B, Juelz Santana, Slim Thug and Raekwon, who it was an honor being able to work with especially since I grew up listening to him.

Parlé: Growing up when Hip-Hop was just starting out and now being a player in the game, how do you feel about the current state of Hip-Hop? Do you think it’s progressing or taking a step backwards?
Yelawolf: I could never say that hip-hop has taking a step backwards. It’s like a sleeping giant. Do you remember when rock became a bunch of bands with big hair with tight pants?

Parlé: Yeah in the 80s…
Yelawolf: Yeah. Hip-Hop is just like that in a way. Hip-Hop is so strong and timeless; I don’t think anything can stop it. They still play Biggie records in the club like they brand new. Hip-Hop will never die and I know it seems like it took a hiatus with all the dance records, but its all good. I’m actually just proud to be a part of Hip-Hop right now.

Parlé: Being a white Hip-Hop artist, do you feel like you’re constantly being compared to the other ones?
Yelawolf: Do you mean, do I like being compared?

Parlé: Right, with Eminem, Asher Roth and a few others, do you feel like it’s harder for you to come out and make a name for yourself?
Yelawolf: It depends. There’s only one truly successful white rapper and that’s Em. I don’t mind the comparisons because at the moment there’s only them. There aren’t many successful white rappers, so who else can they compare me to? People don’t know this but in Nashville there are a lot of white rappers, it’s like a white rapper’s Mecca. If you got a favorite hamburger, the only hamburger you had was from McDonald’s, you’ll compare every other hamburger to that McDonald’s hamburger. It’s human nature so I don’t take any offense to it because the way I look at it one day someone’s gonna be compared to me. There’s never gonna be a plethora of successful white artist and the few that are have to respect the fact that it’s a black culture.

Parlé: As of now, are you working on anything new?
Yelawolf: Yeah, you gotta check me out. I just did a video called “Pop The Trunk” from my Trunk Muzik album.

Parlé: Do you define your music as mainstream or underground, what do you see yourself as?
Yelawolf: You can’t really define my music either way. I don’t like being put in a box. As far as mainstream, many people may remember my voice because I did the hook on ‘I Run’ for Slim Thug. All my past three albums including this new one, Trunk Muzik have been available for download. I’ve enjoyed the success of mainstream with a lot of sold-out shows but I’m just tryna make records.

Parlé: What do you look to for inspiration when you’re rapping and/or writing music?
Yelawolf: Music takes me wherever it wants to. I do write a lot of my own stuff instead of just rapping on beat but the music itself as far as beats, melodies paint a picture for me, and it’s more than just words. I usually just walk around mumbling syllables and melodies and shit. It all depends on the vibe in the studio and what the music sounds like. I’ve only worked with a few records without a beat. I started at 10 writing to music with an acoustic guitar. I try to create a vibe with the music first.

Parlé: How do you feel about artist like Pharrell, Lupe who have done crossover music and managed to gather a wider range of audience from different genres as opposed to mainly sticking to Hip-Hop fans?
Yelawolf: I enjoy it. Hip-Hop has inspired so much; it really has linked a lot of genres together, fan base and music wise. You can’t put Hip-Hop artist on a country record without it being a country song but you can take a country sample and put it into a hip-hop song and that’s what amazes me about it. I appreciate any kind of branch of music. Hip-Hop isn’t just guitar, bass and drums, it’s become so much more. Can you imagine that there’s a kid in Saudi Arabia somewhere tryna make a beat on like a Dr. Groove? That’s what’s so dope about hip-hop, I think. It’s worldwide music.

Parlé: Do you have any words of encouragement/advice for our readers who are trying to get into the industry?
Yelawolf: Yeah, just keep an open mind. Growing up with all the shit that I’ve been through and seen, I was lucky to have music as an outlet and even luckier to have found my calling in Hip-Hop.

Parlé: Yelawolf, I wanna think you for your time.
Yelawolf: No problem man.

As I ended the interview with Yelawolf, I had to thank him again. He is certainly a breath of fresh air in the music right now a part from bottle popping and club hopping that is out there right now. I wish Yelawolf all the best in his career and I hope our readers will check him out.