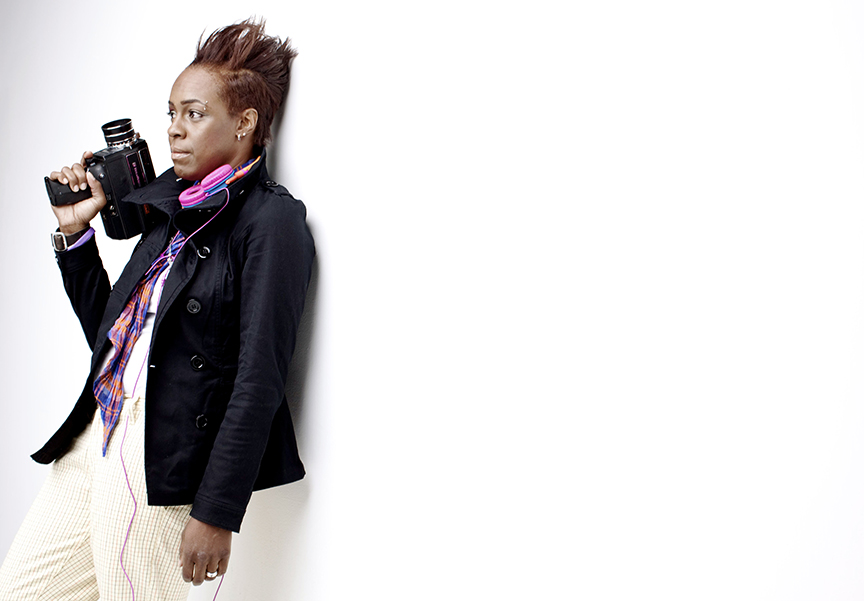 As a lover of music videos, the ones that tell a story to compliment the song’s lyrics appeal to me the most. And for Yolande Geralds, co-founder of Frame by Frame, Inc., it is exactly the way she likes to showcase her level of expertise as a director of film, television and yes, even the exciting world of music videos. She continues to grow in popularity since directing the recent videos “Invented Sex” and “Neighbors Know My Name” from Trey Songz, but amazingly, she started out on a totally different path.

“I actually went to school to write and majored in Journalism at the University of Missouri. And while in college, if you gave me a topic to write about, I didn’t write as well, but if you allowed me to just be and write what I wanted to, I wrote very well. Then I decided that I was either going to New York or LA and people always talk about the struggles of New York as the saying goes ‘if you can make it in New York, you can make it anywhere’, so I moved there,” said Geralds. That move proved to be beneficial. After only a month, Geralds landed a casting internship through ABC doing after school specials, giving her a jumpstart and hands on experience in the television and film side of entertainment. “I find that the best training is being baptized by fire. You truly don’t learn it until you use it-doesn’t matter how much schooling you’ve had. It’s where you just get into it. You have to execute your knowledge,” she continued. “I started out in casting and being in New York, it’s all about the entertainment, whether it is Broadway or film. I decided then that hey, this is what I wanted to do,” said Geralds. “While working in casting on the television and film side, it got to a point where I felt like I wasn’t using my brain as much because I was just looking at pictures and saying ‘oh I think this person is what people wanna see’…I wanted to challenge my mind a little bit more. I figured that producing was the one thing that you had to know to make film or television. I wanted to be a great producer. So I worked in every department so that I could be a great producer and learned everything.” Yolande knew that it would be a little bit easier to get that accomplished with music videos.

While working at Atlantic Records as the Vice President of Video Production, Yolande managed both the rock and urban departments going over budgets, selecting directors and as she puts it with a chuckle, ‘fixing things when they needed to be fixed’. But after some time, the most important and crucial decision was made confidently without hesitation. “After my contract was up, I decided not to renew it and took a leap of faith and started directing full time. Shanta, my business partner, was actually working at Verizon and we met through a mutual friend and found out that the both of us had the same vision of wanting to create,” said Geralds. That vision birth Frame by Frame, Inc., the production company headed by Geralds and Shanta Conic, who started it in April of 2008. “Creatively, I needed more of me and I didn’t get nervous about it because of my faith and trust in God. He’s not going to allow me to make decisions hastily. I talked about it with my parents, thought about it and prayed about it. And told them I was just gonna do it. They said, ‘well, we really don’t have a say because you’ve always done whatever it is you wanted to do anyway,’ Geralds said laughing.

Based in Los Angeles and New York, the concept behind the name ‘Frame by Frame’ came from Geralds herself. “I came up with the title and it is each picture, each moment in time that the image moves is a frame. I look at each moment that’s moving, frame by frame and not just the whole piece,” she explains. There are a lot of elements that set her apart from most well known video directors today. “What most people do, I won’t, and what most people won’t do, I will. I tell people all the time, don’t try this at home. I look at things a lot differently. Coming from a marketing standpoint, I know what the label actually wants. With a consumer and creative point of view- what do I think the artist needs and what do people like to see. I’m known as a narrative director, I tell stories from the artists’ lyrics and as I’m directing, I’m editing in my head at the same time. I look at things from a creative aspect and I’m able to put shots together a lot faster than most people. I take all of that and know that each artist is different and people wanna see different things each time,” said Geralds.

Having worked with such artists like Dwele, Keri Hilson, Tracy Chapman, Teairra Mari and of course Trey Songz just to name a few, she insists that no two videos will look alike. You won’t be able to watch a music video of hers and recognize that it’s her work off the back. “You can’t say that with me. Like how people say oh yeah, that’s a Chris Robinson video or a Hype Williams video. Because each artist is different, what they’re trying to portray is different and what people wanna see from them is different,” she continued.

Earning numerous accolades for her work, Yolande produced the film ‘The Untold Story of Emmett Louis Till’ in 2005 and had first witnessed accounts from those who were there in the midst of the American tragedy. “Growing up in Baton Rouge, Louisiana, you see some form of segregation and you learn it very early. My brother’s childhood friend actually had a situation where they were in high school in which there was an altercation with the both of them and a police officer, which I would say was like a pre-Rodney King type of thing because it involved police brutality,” she explained. Afterwards, Yolande says that she and the friend both talked about it and decided to do the film and got the opportunity to speak with Ms. Mamie Till Mobley and began work on the film. “A lot of people did films on the account, but what makes ours different is that we got in touch with the two cousins who were actually in the room and experienced the entire situation with him, but never spoke about it,” she continued.

With all that she has accomplished thus far, Yolande Geralds makes it her business to remain humble and grateful for what’s come her way-and the things that will be in her future. “Having a dream is where you start, but execute it. Do what you love, and love what you do. Even if I shot a birthday party or a bar mitzvah, I’d be doing what I want to do. Most people just exist, and I don’t ever wanna feel as though I’m existing. I want to feel as if I’m living,” she says. Geralds maintains that nothing is too small for her and that she is always easy to reach approach. “I tell people to never think that you cannot afford me, I still shoot little projects. I still go shoot behind the scenes stuff. I’m not gonna limit myself. But I have the most amazing team over at Liquid Entertainment. They not only take care of me, but they help me, they ride with me, they keep me humble, they go above and beyond to encourage me, and I can never ever thank them enough…without them there is no me. “

For more information about Yolande Geralds and Frame by Frame, Inc., visit www.yolandegeralds.com or www.framebyframeinc.com

Also Check Out:
Zane: Way More Than Erotica
Charlie Murphy Will Not Apologize