Hip-Hop has long brought together people from all lifestyles. What was once stigmatized as belonging to a certain group of people has known broken numerous barriers across the board. It’s been proven that is doesn’t matter what gender or race you are because when it comes to Hip-Hop if the art form is pure and the music is just, then the people will accept you no matter who you are as long as they feel what you’re bringing to the table.

The Far East Movement, who’s members consist of Kev Nish, Prohgress, J-Splif and DJ Virman have been making music together since 2003. This Los Angeles bred group has managed to capture the L.A. party scene and overall party environment with their feel good music and they’ve had songs featured in The Fast and the Furious: Tokyo Drift, Entourage and both CSI: NY and CSI: Miami. With their single, “Like a G6” climbing the charts on iTunes, I was not only fortunate enough to sit down with them for an interview but also got a chance to watch them perform when they came to DC.

The first question I had to ask the guys was about their album Free Wired, their first major debut under the label Cherrytree Records, a division under Interscope. The fellas speak on guest appearances in the album as well as what fans can expect, “We’ve been lucky enough to be able to work with Snoop Dogg, Keri Hilson and a few others.  We’ve had other albums out before, but this will be our first major album.  We’ve come a long way from rapping in our friend’s attic for fun to touring sold out shows. We can only progress forward as artists and I hope our fans will enjoy listening to this as much as we did making it.”

The Far East Movement is one of the first all Asian American Hip-Hop groups today, and definitely the first to go mainstream. When asked how their culture influenced their music, J-Splif replies   ”There are definitely some Asian American artists, but people will support any kind of music, they don’t care about the race.  People associate you more with your Twitter/MySpace/Facebook profile, if you can get them moving on the dance floor, if they can feel what you’re putting out its more important to them than race.”

With the success of “Like A G6” hitting the top spot on iTunes, I was interested in learning how the guys felt about this newly found success as well as how they came up with the song. “Our first song “Girls On The Dancefloor” started to pick up and was featured on America’s Best Dance Crew. So we wanted to try to do another song like that one, but bring it to another place. So we went in to the studio for like two hours, partying and putting the song together. It took another two hours to put that song up online and in three months we had a million views. It was a trip, we already had a song on the radio that didn’t get that much spin and it took close to a year for “Girls On The Dancefloor” to actually become popular. It wasn’t until we were in San Diego performing and we performed “Like A G6″ live and the crowd loved it. Next thing, the song is getting pushed by the label, it’s online and pretty much everywhere. When we did the song, we just wanted to make a good party song, we didn’t know at the time that it would become as big as it is now.”  Prohgress says.

“I can’t see us doing anything but music” says DJ Virman when asked what they would be doing if they weren’t making music. The group recently had a dream come true when they got to work with Snoop Dogg. “We did a cameo for “I Wanna Rock” music video and we got to talk to Snoop Dogg afterwards and he was real cool, to meet a Hip-Hop legend is a dream come true. We can only hope to be as influential music wise as he’s been during his whole career.” 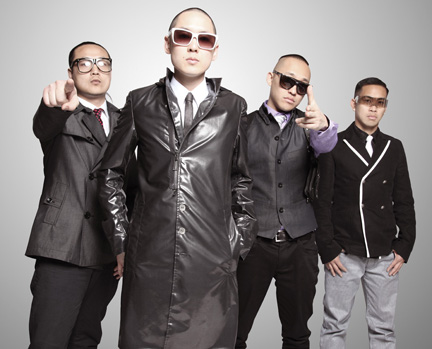 I quickly learned of Far East Movement’s strong devoted fan base while following them when they came to my city. When The Far East Movement entered the doors of Josephine’s in Washington DC, fans surrounded them with love and support. The guys were gracious enough to stop and shake hands with people and take pictures.  There was so much screaming and shouting that, I could barely hear the announcer introduce them.  Fans who had come from all over, arrived in Josephine’s to watch these guys perform at a club, not a venue but a regular nightclub. The place was packed wall to wall filled with fans eager to see these guys in action. When they finally performed about an hour into the night, the place erupted with people rushing to get closer to the fellas as they performed. “The only thing I regret is that when it’s packed like this, you don’t really get a chance to talk to the fans personally,” said Kev Nish.

The guys were willing to give advice to fans and upcoming aspiring artists, “Surround yourself with positive people and keep doing what you do best, if it’s making music and having fun than just do that. If you love what you do, then the money and all that will come to you.”Free Wired is in stores now. I wanna personally thank their road manager Tone, who invited me out to watch the guys perform and The Far East Movement for taking the time out for the interview as well as letting me hang out with them. Readers and fans can learn more about The Far East Movement as well as getting updates about the guys and what they’re up to.

Also Check Out:
Producers The Stereotypes – The Story Behind The Hits
Colby O’Donis: He’s Been Gone but Now He’s Back Again
Pretty Ricky – Consistency & Longevity in Hip-Hop and R & B