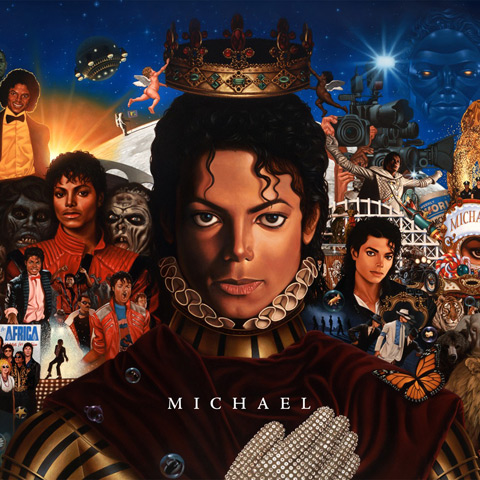 It has been more than a year since Michael Jackson left this place called Earth and the rumors began circulating as to just how much music he had left for us to hear and for us not to hear. Since then, Sony Music Entertainment began gathering together a cohesive group of producers and sound aficionados to finish many of the cuts Jackson had been working on during the final years of his life. These songs, a set of ten, comprise Michael, the first in a long line of posthumous albums due out over the next seven years.
Upon playing Michael we are treated to an anthemic opener, “Hold My Hand.” It gives us glimpses of Michael’s devotion to songs about peace, love and unity. The slick beat boxing “Hollywood Tonight,” encompasses the magic of classics like “Billie Jean” and “Scream”, while keeping modern with the auto tuned sound and memorable beat. On “Keep Your Head Up,” Michael sings about hope in the same vein as “Heal the World” from Dangerous.
“(I Like The Way) You Love Me” featured on the Ultimate Collection has been updated with an opening phone message, more piano and better showcasing of Jackson’s vocals. “Monster,” begins with a scream and a dance worthy cadence that becomes one of Michael ‘s masterpieces. There has been much talk about this particular song due to the demo sound it offers, yet it is replete with signature Michael hiccups, howls, and unmistakable tone. It is one of the songs that on first listen grabs you, despite the fact that it feels as though this was the least completed of the collection. On “Best of Joy,” one of his last recordings, Michael is in full effect singing predominantly in falsetto. In spite of its short length, “Best of Joy,” finds a pleasing space amongst Jackson classics like “Human Nature” and “Childhood.”
With “Breaking News” and “I Can’t Make It Another Day,” we are shown a more aggressive Jackson. The first being a searing assault on the media’s obsession with Jackson’s faults and the latter featuring guitar playing from Lenny Kravitz, finds Michael fervently searching for love and singing in a manner reminiscent of “Dirty Diana.” “Behind The Mask,” features the most signature hee-hees from Jackson out of those present in this portfolio. The sound is retro and there is no doubt the way Michael sounds that this was recorded in the 80s. His voice sounds fresh, but not as mature as on others found on this album. It is possibly one of those songs that may not be released as a single, but will find its way on an iPod.
The finale, “Much Too Soon,” written during the Thriller sessions, is an effortlessly written ballad that closes out an impressive collage of songs in spite of the constant controversy surrounding the vocal acrobatics exhibited on some of the songs. Michael stands alone in the collection, incomparable to any other Jackson project, but is an indication into what we would have received if Michael was still alive.
Michael receives a PARLÉ
Rating:
P…Horrible
PA…Tolerable
PAR…Good
PARL…Kinda Great
PARLÉ…Classic
Also Check Out:
Love Letter… R. Kelly album review
Love Me Back… Jazmine Sullivan album review
Eric Benét talks Crying Men, Seventies Soul R & B, and New album
Donell Jones: Tenor Voice with a Laid Back Vibe
Kem: Smooth R & B with Spiritual Tapestry