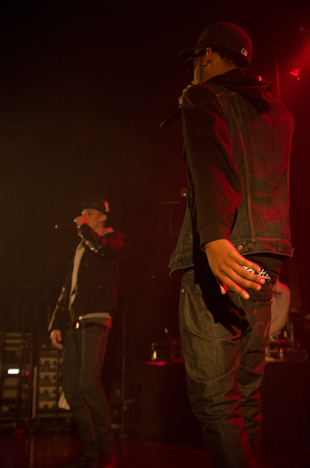 “My name is Machine Gun Kelly. If you don’t know who I am, you’re a goddamn idiot, because this is my show.”   One could mistake this for a bit cocky, but those in the know are sure its only confidence.  Confident as a result of the love, the fan-demonium, and the head turning of major backing which is sure to come, perhaps in the form of Bad Boy Records.  If opening for Diddy-Dirty Money “Im Coming Home Tour” wasn’t enough, what could be more special than feeling at home many miles away?  Ever had that feeling?

Step into the shoes of Machine Gun Kelly, MGK for short, Cleveland- Ohio, bred soon to be world renown, but for now, respected by many.  There were more than 300 some odd plus people that showed up to Gramercy Theater to rock.  A night perfect for REAL HIP-HOP.

Picture this: Hip-Hop the way it was meant to be. The way its hardcore advocates deserve it.  Embrace creativity, embrace artistry.  Minus the so called bling and emphasis on other things, music speaking to you. One day after the supposed end, a brand new beginning;  ushered in by a bevy of its youngest and talented contributors.

Kicking off the night, Amityville, L.I.’s own D.A. The Future hit the stage and ran through a very impressive catalog includes the Ryan Leslie/ Fabolous sampled “I’m Addicted”. Held down by DJ Shuttle, D.A. The Future ended the night tearing down his choice of G.O.O.D music tunes.  ReminÍscent of the early 90s famed Onyx team, D.A.s energy was contagious, and his delivery made ever bar and cadence come to life.  Underground for now, but not much longer, D.A. The Future is definitely someone to watch for. His mixtape, Youngin’ with An Attitude coming soon.

Brooklyn’s own DJ E.T. Kept the crowd partying on the 1’s and 2’s as well as some live percussion before everyone was blessed with word play from Wordspit to show why he’s the “illest” and remind us all of his “Japanese B—-“

Stage presence is not a commonality, there are rappers, there are performers then there are those who have done their due diligence in perfecting both. One name- Wordspit.  If you are a non-believer, let google become your best friend.

Not to be outdone, the headliner Machine Gun Kelly hit the stage like a tornado, reassuring all that its ok to “live your dream”.  It was hard to find one set of hands that were not in constant motion as Kelly and his crew tore it down. Every inch of the stage, was utilized, and every fan interacted with–even Margaret, a familiar face in the crowd, one of Machine Gun Kelly’s followers on twitter whom he picked out the crowd effortlessly and thanked for all her support as well as others.

Without a doubt Machine Gun Kelly is deserved of the buzz, the support, and more.  A performer, an artist, a person.  He shared it all at the Gramercy Theater.

check out the highlights:
http://www.youtube.com/embed/z5JI9MQxXRA

Rapper, Poet, Wordspit: Not A Joke, Get It Clear

Music: The Soundtrack of Life

Through Osama’s Death, Justice Has Been Done