Home All Freestyle of the Week Review: Action Bronson, “Nothing to Worry About” 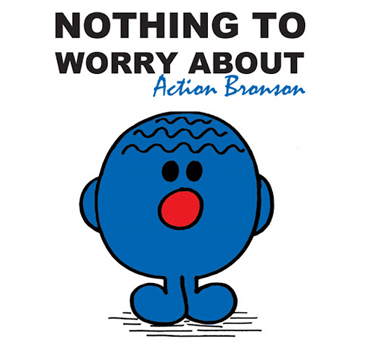 I have long wondered how long this series of critiques could go without a concrete definition of what, exactly, I was reviewing. This was done on purpose for two reasons: one being that a freestyle is a somewhat slippery thing to taxonomically classify, and the other that as long as I left it open I could avoid trapping myself in any potential corners. But with this latest review, I feel we may be reaching the end of the syringe. So I’ll remove the needle and explain my reasoning first.

A freestyle is NOT a verse kicked off the top of the head. A generation of 8 Mile watchers and listeners amazed by Jay and Weezy insisting they do not write has twisted the word to this erroneous meaning. If everything people heard as a freestyle, Eminem’s “Despicable” for instance, was truly off-the-dome (the preferred term for such raps) it would be among the most incredible creative flexings in all of human history. The mind simply does not string together words that brilliantly without some sort of processing time. So what, then, is a freestyle?

According to Big Daddy Kane in interviews taken from How to Rap: The Art and Science of the Hip-Hop MC, a freestyle is a written verse that is “free of style.” It is a verse that is meant to able to be applied over numerous beats, a brag track showing off the artist’s ability in condensed form. Think of them sort of as rap business cards; this is why astute listeners of ciphers, like the ones composed for the BET Awards, will notice emcees spitting lines from other songs formatted for that beat. This pollination of different tracks is the reasons why freestyles and remixes are so intertwined as to be almost synonymous with each other, the difference being that, in theory, that freestyle verse is flexible enough to be utilized over any number of soundscapes.

Action Bronson picks a most intriguing one to drop a verse over here, hijacking indie rock darlings’ Peter Bjorn and John’s “Nothing to Worry About.” While seemingly an odd combination, the marriage of Rap and PB&J (a food pun for you Bronson fans) was already explored in Mick Boogie’s Re-Living Things, a reworking of the band’s 2009 release.

Opening with stomping Swizzy-esque drums, the brontosaurus bottom line is counterbalance by the nails-on-a-chalkboard vocals of the band’s original hook. Smooth rolling bass and a spartan construction ripe for rhyming over comprises the rest of the song; Bronson made this choice like a fine sommelier.

Being the chef that he is, Bronson’s finest ability is to take his flow–so frighteningly like that of Ghostface Killah–and infuse it into whatever dish he finds himself on. He spits with more clarity, lacking the gonzo sensibilities of Pretty Toney, but has the same eye for brain melting detail, particularly when it comes to food. The slate delivery employed here, comprised of simple brags for someone of Bronson’s credentials, is a serviceable verse. It is the beat selection which makes this cut worthy of Freestyle of the Week honors.

“Nothing to Worry About” receives a PARL