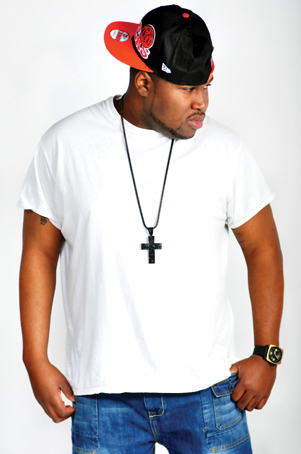 For Alphamale, Hip-Hop started as a hobby and has moved to become a career. In his small town on Long Island, Hip-Hop was not a staple of the culture and far from a way of life. Even at a young age obstacles were faced strictly because on skin tone and upbringing. These issues pushed Alphamale towards depression, with much built up resentment and aggression. Growing up he used to write poetry to vent and escape from his issues. At this time he felt his life goal was to become a writer but overtime that changed. In college while taking courses in Video Production and Radio Editing, he found his true passion in recording music. That’s where he learned to take his poetic background and blend it with his love for Hip-Hop.

His sound, some would say has an Old School vibe to it. After graduating college, Alpha set up a studio in his house to record, but was not satisfied with merely recording music to send his friends. He set out to find a studio to record in, he was then put into contact with someone who would soon become his biggest advocate. When he linked up with G-Rod, it started simply as a studio to record at. As the first mixtape Long Island Experiment came together they realized there ability as a team. Shortly after the release of L.I.E they were back in the studio working on Bow to The Blessed the second mixtape that Alphamale would release, just two months after the first project. This album proved to be a more structured sound and was gravely helped by G-Rod’s guidance.

The duo’s teamwork lead to the formation of Indefinite Records NY, which G-Rod is the founder of and Alphamale is the Co-Owner. Although Alphamale has only been recording professionally for under a year, his fan base is building and he plans to make it a big summer.

Ray Lavender – Ready For His Close-Up

Pop & Oak – Get Familiar With The Production Duo

After Overcoming Adversity, Jordy Towers Is An Artist To Watch