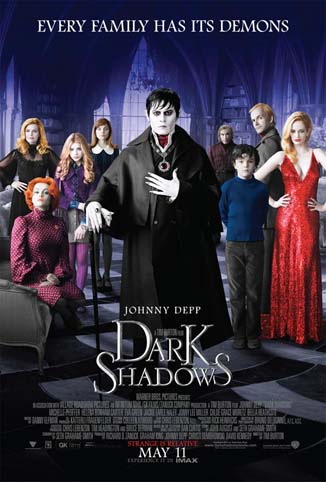 Since it’s airing on television, Dark Shadows, has been a camp/cult favorite of not only soap opera fans worldwide, but fans of dark, morbid storyline arcs, witches, voodoo and the like. This is why when fans heard there was a Dark Shadows movie in the works; the fervor for the Collins gang became even more intense. The series collections found their way back on eBay being sold for hundreds of dollars and trying to locate one in a movie shop is next to impossible, unless you plan on driving to nowheresville to get an opportunity to once again see Angelique put a curse on Barnabas Collins, the parallel time plot or a series of séances to summon Sarah Collins. The penchant that made Dark Shadows so successful was the acting, sophisticated sets and dreary music. While the same vein may have been the intent in the Dark Shadows movie starring Johnny Depp and Michelle Pfeiffer, what actually was achieved was quite the contrary.

The movie opens with what could be called a back-story on Barnabas and his upbringing. The audience is shown what happened to his parents and who was ultimately responsible for their demise. From there, Barnabas sets out on a witch-hunt to locate the murderer. Johnny Depp manages to play Barnabas quite well – walking like him, talking like him, even holding the serpent cane as he did back in the soap opera. Michelle Pfeiffer plays the matriarch of the family, Elizabeth Collins. The visuals provided by director, Tim Burton are top-notch. Where Dark Shadows becomes a literal nightmare is the fact that it seems to drag in the middle. The cyclical shift from comedy to drama tends to give the audience a headache. You better bring some aspirin and water along with you along on your trip. Of course, no one expected this to be the unprecedented supernatural element television show that ran for roughly five years, but a little more melodramatic pizzazz to the script would have been a nice touch.

The acting, however, does make up for the seemingly lackluster film. If one were looking for a lesson in Collins 101, don’t expect this film to provide any kind of formal tutorial. You can at least get a chuckle or two- that is after your migraine has ceased.

Movie Preview: Woman Thou Art Loosed: On The 7th Day

Beats, Rhymes & The Unrealistic Reality of a Young Rapper

Kareem Green – No Stranger To Comedy

“Death of the Diva”… Musical Review