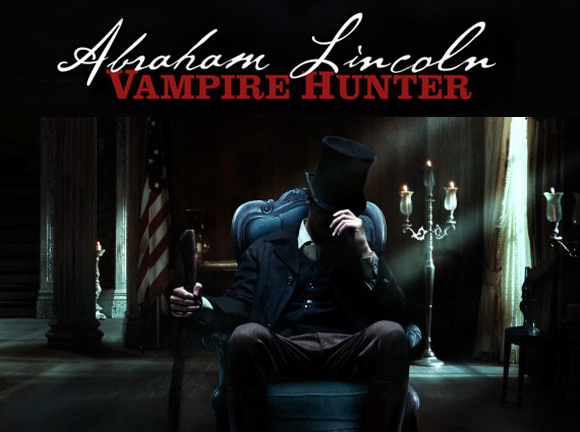 History doesn’t remember the battle nor the bloodsuckers

Who knew Honest Abe, America’s 16th president was a whiz with silver tipped axe, freeing the South from vampires. Based on screen writer Seth Grahame-Smith’s horror mash-up novels, “Pride and Prejudice and Zombies” is still in preproduction while, Abraham Lincoln Vampire Hunter, hit the big screen just two years after the source material book was printed in (March 2010).

Smith is talented enough to keep the gag going longer than you would expect, but to stand the chance of pulling this off on screen, you need wit and deft touch. Sorry director Timur Bekmambetov, your frantic and awkward film making style does not work.  Perhaps the producer of the movie Tim Burton would have been a better choice, famously known for dark quirky-themed movies. Hello!

The story line follows Lincolns burgeoning career as a lawyer, politician, president during the civil war, and his secret war against darkness.  Starring Benjamin Walker as Abraham, he witness’ his mother’s death at the hands of Jack Barts (Matron Csokas), vampire slave-trader/business man. Abraham patiently waits some years and decides to avenge his mother.

Lincoln uses the help of the mysterious Henry Sturgess, (Dominic Cooper) who teaches Abraham the art of vampire hunting. Despite Sturgess’ instruction not to have family or friends, Abraham courts Mary Todd (Mary Elizabeth Winstead) and reconnects with his child-hood friend William Johnson (Anthony Macki). However, Lincolns loved ones and the country itself is threatened when the head Vampire, Adam (Rufus Sewall) befriends confederate separatists, forcing honest Abe to take action beyond his political realms.

From the digitized blood spewing, decapitated heads, and slavering fangs, Abraham Lincoln: The Vampire Hunter bombastic action set pieces are all thrown at the camera. Believability and historical accuracy is trashed. The energetic tone is lacking, and the characters are exceptionally one-dimensional which left me with mixed emotions throughout the films grotesque nature. The tone was not “scary” or thrilling enough to meet the criteria of a horror film, but then again the movie took itself so seriously it was hard to get a chuckle out of it.

Overall the film does not deliver an adequate stitching of (albeit campy) historical retelling and bloodsucking southerners. Complete with whip lashing, slow motion camera-work and remorseful axe flinging and Vampire infestation. Abraham Lincoln: The Vampire Hunter is a factory faux of shabby looking effects and a product of unapologetic film making not to mention an insult to a very talented screen writer. The sad part is, a sequel is in the making.