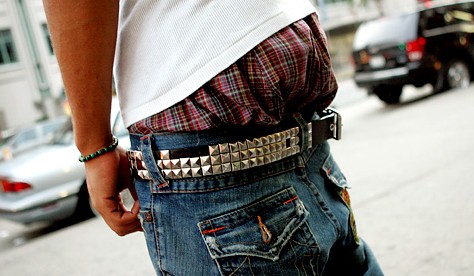 There are many who would say that what you wear defines who you are, and your personality. However, for a long time now this sagging pants fashion has went from fad to a way of life for some. As a young man in my teens, I did wear my jeans a little loose. However, somewhere along the way, the fad has evolved into something I dare say is borderline offensive.

When did it become the cool thing to walk around with your underwear showing? To the point that you might as well not even have jeans on. Has our society become so lax that we just fall in line with just about anything?
How has running around with your pants falling down off you become the fashion of today’s youth? Also, if you are over the age of twenty is this really a style that you sincerely find great. Many have their theory of where this fashion started. However, in my opinion that is irrelevant now, this is something that has gotten crossover appeal.

Obviously the Black kids are doing it, but most White, Latin, and Asian kids have adopted this style too. It has gotten so out of hand that some mayors have tried to introduce new legislation to curb or stop this fashion  trend outright.

Now as much as I might dislike the style I am not for our local law enforcement to be riding around handing out tickets for how someone is dressed. Neither am I for the local government dictating what an individual can and cannot wear. I think that some of our youth would find it a lot easier to find employment if they did not choose to dress like this on a daily basis. In a small town in North Carolina, this has become a very hot topic and was so hot of a topic that an ordinance had been set to be placed on the books. I do see the need for something to take place because the youth of today don’t have a clue of how ridiculous this looks and that a first impression goes a very long way in our society.

However, a lot of this falls on the shoulders of some of the older generation. As we grow up in life, some things should be placed by the way side, I love the Hip-Hop culture but there are things within the Hip-Hop culture that can be overstated at times and sagging pants is one of them. This sagging pants fashion has taken a great turn for the worst. It has become a very negative stigma within the Black community. Will this fashion ever go away? Well as long as your favorite celebrity is wearing his or her jeans in this style, I think it’s here to stay.

Danny McFarlane
Processing…
Success! You're on the list.
Whoops! There was an error and we couldn't process your subscription. Please reload the page and try again.
non gamstop on BestUK.Casino