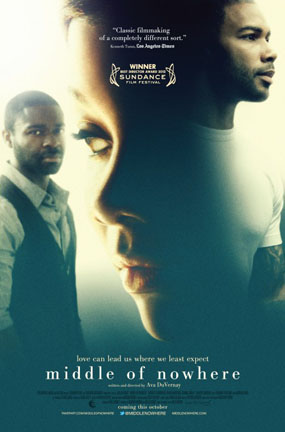 Women of all walks of life will love this movie. Director, Ava Duvernay, seems to getting better in her ability to tell a complete story, having already captured spirit of women and struggle for freedom in her full length feature, I Will Follow, which premiered at the Urbanworld Film Festival a couple years ago. Duvernayreturned this year with her latest, Middle of Nowhere, which hits theaters on October 12th. Since its debut at the Sundance film Festival, the movie has been garnering praise. Duvernay was even awarded with the Best Director Award at Sundance, the first time a Black female director has won the prestigious award.

The film introduces a new face to the big screen in Emayatzy Corinealdi, starring as Ruby. Her husband, Derek (Omari Hartwick) is in prison for gun possession with a sentence of eight years. The charges come as a surprise to Ruby, but the separation from her husband is what really turns her world upside down. The future looks bleak but she promises to stay by her man’s side as she hopes for an early release based on good time. Seems she’s the only one that truly believes they can make it through, Derek has his doubts, and her family, mainly her mother, thinks the whole situation is a lost cause.

The movie follows Ruby through the tribulations that far too many minority women are dealing with. Duvernay doesn’t present Middle of Nowhere to place blame however. In fact, the movie is about freedom, a theme women everywhere can relate to, even if they’ve never been in a situation similar to this.

The movie is a solid display, but for me there were a few holes in the pursuit of freedom that threw me off. I’m all for reading between the lines and artistic expression, but sometimes I need answers and I need to understand why your main character chooses to do some to the things they do.

The casting on the film was pretty great for the most part, especially finding Emayatzy and giving Omari his first real aggressive, somewhat gangster role. I did have an issue with actor who plays the clean up man in the film.  You know every movie of this sort has a man that makes things better, even if just temporarily.  In this case that man is Brian, played by David Oyelowo. While he does a fine job with his acting, i just don’t think he fits the description in my head of the ‘competition.’ Female viewers may disagree, I just found him hard to believe myself in this particular role.

That’s still a small issue.  The movie deserves to be seen and Black art needs to be supported.  So head to the movie theaters and develop your own opinions of this movie. As for me…

Middle of Nowhere receives a PAR