He score a perfect score on the SATs, majored in Government and graduated from Harvard all before he turned 20. All the while, learning to play several different instruments, developing a serious love for music. That sounds a bit outlandish, but it’s the real story of Grammy-nominated producer/artist, Ryan Leslie. With two albums in pocket, Leslie is the man who has done what some may have deemed impossible.

A scholar in his own right, Leslie could have stayed in school and followed the traditional path of living but he found his passion in music and decided to pursue his dreams. “I believe we all have a passion and that we should follow our hearts no matter what,” Leslie says. Following his passion has taken him all over the world, most intimately to the ears of his many adoring fans. He has also worked with some of the biggest names in the industry over the last few years, as a producer and as a vocalist. Now, Leslie is taking on a new feat with the release of his third studio album, Les Is More, which is also his first Rap album.

Ryan Leslie started out as an intern for producer Younglord. It was this 30-day experience which he credits as the beginning of his musical career, back in 2003. During those days he produced “Keep Giving Your Love to Me,” which was featured on the Bad Boys II soundtrack and performed by a singer of the name Beyoncé. From that moment he went on a fast track, Diddy being impressed by his style of production offered him a management contract. Upon agreeing to the contract Leslie was given the opportunity to work with all the Bad Boy Records artists and later produced for Britney Spears.

His stock was continuing to rise and his production was a refreshing breath of air to the music industry. He soon created his label, NextSelection after meeting and being mentored by Tommy Mottola, who offered Leslie a recording contract and publishing deal. His first act off of NextSelection Lifestyle Group was model/singer Cassie Ventura. Her debut album was eventually released in conjunction with Bad Boy Records. 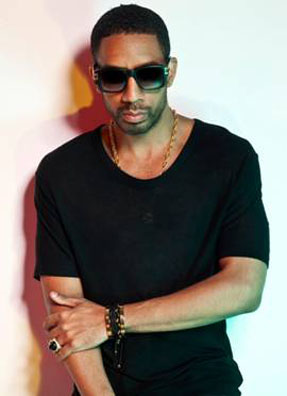 Still it wasn’t until 2009 until Leslie would release his self-titled debut album. The project featured the hit singles, “Diamond Girl” and “Addiction.” Sticking to his true artistry, Leslie wrote, arranged, produced and performed every song on the album. He dabbled in directing for the video of his single, “How it Used to Be.” Figuring he’d waited long enough to release a project, Leslie released his sophomore album, Transition, the same year. “You’re Not My Girl” was the lead single. Again he engineered, wrote, arranged and performed every song on the album, which garnered him a Grammy nomination. All the while he was touring and doing shows to create and sustain his buzz. Leslie admits that he’s a huge fan of utilizing the internet and digital media to access and gain fans.
With the success of his previous albums, Leslie decided to step away from singing and take on the challenge Rap. It should come as no suprise that Leslie would take a step into the Rap world, having spit a few bars on his first two albums. The buzz single, “Glory” was released a year ago, where he explains his decisions to get into Rap as well. The first official single off the album is “Beautiful Lie” featuring rapper and often-collaborator Fabolous. His explanation of creating a Rap album was flippant, “what makes anyone want to do a rap album, I decided to do something other than singing.” Almost as if he just woke up one day and said, ‘let me do a rap album.’

Les Is More features 14 tracks and will be released on October 22nd. Fabolous is the only feature. A follow-up for the album is already slated for early 2013.
Leslie is also a philanthropist he used his first music advance to mentor youth. He works closely with LetsFCancer and All As One charities. He was named Artist-In-Residence at NYU’s Clive Davis Institute of Recorded Music. To add to his philanthropy he has traveled all over the world and shared his knowledge and wisdom with the youth. “I’ll be finishing my next album in North Africa at the end of the year and while i’m there I will be underwriting an RLES orphanage in Sierra Leone to provide them with supplies,” Leslie informed us.
Stay tuned and on the lookout for this extraordinary gentleman who has found his passion and used it for good works. Take notes…