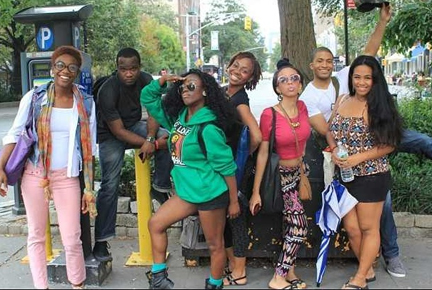 Being in the unique position to see a plan come into fruition is an amazing thing. To know that someone has developed a plan for themselves over numerous years and even though the plan might not have been completely visible to them in the beginning, it seems crystal clear in hindsight. Similarly, with presidential debates on television, it’s a lot like the journey of the candidates, let them tell it, this wasn’t always in the cards, but when a plan comes together, it’s a magical moment. Such is the case for Shamirrah Hardin, albeit, on slightly less than the national stage, Hardin is making the debut of her play Chains in New York City this weekend, the first production for her newly founded theater company, True Stages. Chains was written by Hardin, who also took over directorial duties for the show. Once it hits the stage this weekend, the majority of the audience won’t know the back story, and the focus will be the overall production, but I recently got to sit down with Shamirrah to look at some of those early stages that got us here. So before we get to the actual show, we have to look at the journey. 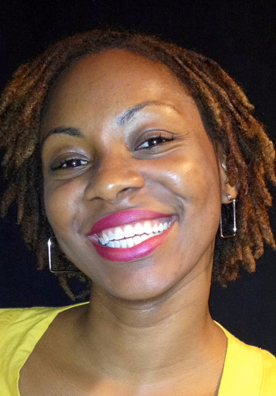 Like many entertainers, performing arts has been a lifelong passion for Hardin (pictured, r). Growing up in Oceanside, California, Hardin’s parents enrolled her in The Academy of Performing and Visual Arts, noticing her early interest. It was there that she got her first acting and dancing experience. “It’s always been a passion for me,” Hardin confesses. “I feel the most alive when I’m on stage.” She recalls her first experience directing came at just four or five years old, with a skit she created for her brother and parents to perform, a skit her parents still have on tape for all to see. Initially performing arts was supposed to be a hobby, something Hardin would do on the side while making a living with a much more lucrative career. So when she enrolled in Howard University—years removed from her days in performing arts school—her declared major was psychology. It wasn’t until her third year that the signs became more visible that theater and the arts might be bigger part of the equation than originally expected. “I did this internship at a research center in Chicago and it just hit me, I can’t live this life, being in a cubicle from 9-to-5, all this research, I need to be spinning somewhere, I need to be creative,” Hardin recalls. She gave it deep thought, prayed on it and took the signs she was receiving from God and decided the switch of majors was necessary. Even though it required an extra year in her undergrad career, she was convinced it was the best move.

Chains is actually the first product of that decision. It started off as an assignment for class and then ended up becoming her senior thesis. The original concept looked heavily at slavery and compared it to issues that people were still dealing with in these current times. The play even led her to Ghana, getting the school to fund a trip that was originally a bucket-list item, now a research tool to help complete the content for her debut play. After almost four weeks in the motherland, visiting slave dungeons and developing a deeper understanding of slavery, Hardin returned to D.C. eager to put the finishing touches on her work. She completed it a short while after and the play made its debut in D.C. to sold-out audiences. That was in 2008.

After graduation it was back to normal, which included getting back into the world of the 9-to-5. She continued to pursue arts as just a hobby, but that wouldn’t last long. By 2010, Hardin was back in school, attending New York University for a Master’s Degree in Educational Theater. It was there that she would really mold her talents as a playwright and as a business mind in the arts. That same year she started her revisions for Chains, developing the framework for what it is now, a play about freedom and overcoming spiritual, mental and emotional struggles. Since freedom is the fundamental theme of the play, I asked Hardin to provide her definition of the term. She explained it simply as, “not being burdened, and knowing what’s best for you and being able to do that.”

In developing the play, Hardin also had a plan to develop a theater company to produce the play. True Stages Theater Company, the brainchild of Hardin was a serious process, but it seemingly came together with the help of some divine connections, launching officially in March 2012. Hardin met the company’s Director of Education, Natasha McLeod at NYU, both of them working on their Masters together. Next she met the company’s Managing Director, Andy Jean-Gilles at a workshop called Actors, Inc. in the city. The final piece came when Shamirrah and Andy attended the one-woman show for fellow actress and playwright Fariso Jordan, who is the Director of Marketing and Public Relations for True Stages. After an extensive interview process and even asking members to write a statement of interest, the four co-founded True Stages Theater Company together. “They all play a fundamental role in bringing forth the vision,” Hardin compliments. “We all have different personalities; we all have different strengths and weaknesses, but True Stages would not be what it is or what it needs to be if either of us were missing from the equation.”

The goal is for True Stages to grow in the coming years with several locations around the country, including L.A., Chicago, and Arizona, where many members of Hardin’s family currently reside. The goal is provide entertaining shows, and shows that are enjoyable for viewers, but the company wants to focus on bringing change in the community through the work. The plan is very similar for Chains. Touring around the country is the next step, and the message and discussions that take place after shows can help create the change that the team want to see.

With the New York City show debut quickly approaching, Hardin hopes that people who get a chance to experience it will, “take a look at their own lives and ask themselves if they really are living to their potential or if there is something that is holding them back from being their best self or experiencing the level of freedom that’s really available for them.” It’s a deep question, but one that can only be tackled appropriately after viewing the play.

The Cast
I met four members of the cast, including the three leading ladies and the leading man, played by Andy Jean-Gilles, sticking to the role he played in the Chains reading earlier this year. The ladies auditioned for the roles, each having a prior professional relationship with one of the True Stages co-founders, and finding out about the casting call through them. The process to this point for the cast is three months in the making.

Cherie Danielle plays Danielle, a singer and writer. Somewhat of a romantic, like many women she has a fantasy of what love is. Danielle is a sex addicted. She enjoys sex and believes she has the freedom to enjoy it as she pleases.

Youmie Jean Francois plays Gwen, she is fun, loving and likes to live life to the fullest. Gwen is a drug addict. She believes heroin provides her with a freedom from this life.

Andy Jean-Gilles plays Adam, a character who is unable to separate his life from his relationship with Shari.

The cast had some deep insight on the importance of the roles they were playing and the task they are undertaking. They unanimously conceded that they were prepared for the lights to go up, and when they do, they plan to bring their all. “This play is very close to my heart, I think of all the people I’ve know who were addicted to something, not just these three addictions that we’re playing, every time I walk on that stage,” Precious explained. “I want them to be in my spirit, because I am representing them, whether it’s honoring their recovery or remembering what they’ve gone through. I just want to honor that because each of us is addicted to something.” Youmie added, “Chains is written by an amazing young woman, brand new theater company, first show, so there’s a lot of expectations and this is her baby. And what people will see is how she took care of that baby. What we actors do and produce on stage is truth, everybody’s truth… we are the mirror, and sometimes people haven’t looked at themselves in a while, but every now and then it’s important, so that people can fix their hair.”

The journey is coming full circle and now it’s up to the viewers to come out and support Shamirrah and the amazing team she’s put together with True Stages as well as the wonderful cast and crew that make up Chains. For me, chronicling the journey was over, but before my time with her ended, Hardin had one final point she had to make, so much so that I can’t complete my story without including it. A true team and support system goes a long way for any entrepreneur, and for Shamirrah, she is not only supported by her True Stages team and crew, she has full support from here family too, especially her mom and dad. “They’ve always believed in me since I was a little kid,” she recalls, reverting to a place obviously filled with loving memories. “Once I made the decision that I was going to choose theater as a career they were soooo supportive. I know some people once they say, ‘I wanna be an actor’, their parents practically disown them, but my family was like, ‘oh yeah, that makes sense, it totally fits; you’re going to be great in whatever you do.”

They were right. Greatness surrounds her and the show is just another step towards more of it.

Also Check Out:
Won’t Back Down movie review
Fariso Jordan – Setting Her Own Stage
Upcoming Star, Nicoye Banks Speaks on Acting Craft
Renaissance In The Belly of a Killer Whale – A Chat With The Creators
End of Watch movie review