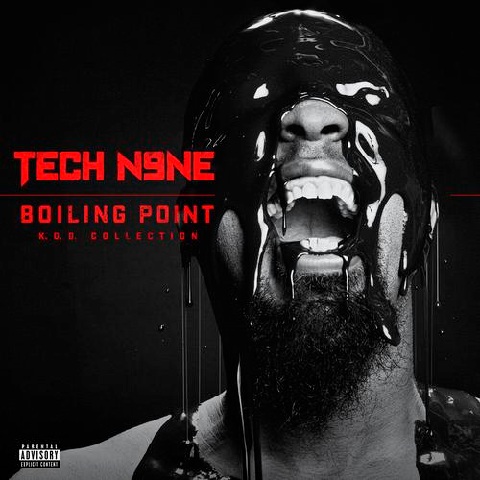 Aaron Dontez Yates is back at it! Better known by his stage name, Tech N9ne, the Kansas City, Missouri rapper drops his latest EP Boiling Point just in time to finish strong in 2012. The album delivers everything we have come to expect from Tech at this point in his career, blistering vocals, mixed with over the top instrumentals, which help produce a listening experience unlike any other artist.

Being a veteran of the Hip-Hop game Tech uses Boiling Point as a teaser to peak the interest of fans. It’s his third EP this year, part of a year that included the longest tour in Hip-Hop history with, The Hostile Takeover Tour. Boiling Point is the fourth album in the K.O.D. collection and it picks up where Yates’ last E.P., E.B.A.H. concluded. The entire project is produced by Seven.

There is definitively a mental under-tone to all seven tracks, beginning with the single “URALYA,” which is also the project’s biggest track.

With topics ranging from killing exes to doing hard drugs to describing—in detail—a tumorous growth, this EP is made for Tech fans. The dark content of the tracks appeals in large part to loyal Tech N9ne listeners. You have to admire his dedication to his fans and his brand of music when he could easily make a more commercially marketable project. Tech’s style of Hip-Hop is always shocking and never bland.

Perhaps my favorite tack on the project was “Heavy” primarily because the instrumentation is out of this world. With a hypnotic kick drum and an electric guitar from another planet this track delivers for me even more than the headliner “URALYA.” Boiling Point is barely 40 minutes, it introduced thought provoking concepts and unique beats. On the track “Alone” you are allowed to see the other side of Tech, the side that if given the chance, would put him in the mainstream area with the likes of Kanye and Hova.

Overall, Tech delivered on this Boiling Point. It was solid and gave fans and those new to Tech N9ne something to bob too. The length and darkness, which at times sounded forced and cheesy, were the two let downs of this project. Nevertheless, Boiling Point is a great for its hedonic beats and Tech’s flawless delivery of ideas.