Skip to content
Home » Is “Thirst” Real? Or Just A Conceited Woman’s Dream? 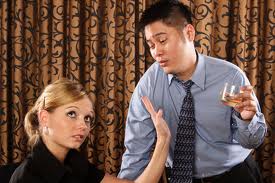 “Man, the thirst is real out here!” and “Why are these men acting so thirsty?” are just a few sentences that you might here whenever you go to a club or bar. Thirsty is the new go to word to describe a man who approaches women without knowing when to fall back and simply not knowing when to take “NO” for an answer. There are many cases where a man will continue to run game on a female even after she has already told him that she has a boyfriend or that she isn’t interested. You have men who will spend the whole night chasing one female in the club and may even get angry once she rejects him. Men (and women) who do this are the perfect examples of someone being thirsty. Even on social networks, women are not safe from thirsty guys who flood their inboxes. However, many women fail to see the difference between a man who is simply giving a compliment or trying to make conversation and one who is truly being a thirsty male. Maybe some women choose not to see the difference because calling a man who wants them “thirsty” is the ultimate ego booster.

There are too many cases where women instantly say that guys are being thirsty simply because they attempted to pursue them. While there are men who truly are thirsty, as well as women who are constantly badgered by these men. Is this really fair to the men who only want casual conversation and know when it’s time to back off without being thirsty? There are situations where women are simply conceited and thus automatically think that every man who speaks is about to bring the thirst. For example, one night while I was at a bar, a female and her friend was standing in front of the doorway leading to the restrooms. So instead of rudely bumping her in order to get through, I stood in front of her and said “Excuse me.” Before I could finish the sentence and walk through, her first reaction was to look at me and roll her eyes. The second time I said excuse me, she decided to instantly tell me that she had a boyfriend. Since she was being rude, I decided to say “Well, unless you’re waiting on him to leave the restroom, you need to move out of the way because I have to piss.” She seemed embarrassed at the fact that she made herself look foolish in front of her friend for instantly thinking that I was about to try to flirt or “holla” at her. There are many situations where females do things like this to innocent men. Is it because they truly think that all men are thirsty, or because they’re women who get their ego boosts from shooting down men who act thirsty?

It is true that there are in fact men who act thirsty and won’t leave a woman alone until he at least gets the number. I do believe that these thirsty guys mess it up for normal men.  However, it is completely unfair for women to believe that every man who speaks to them is thirsty. It is just plain arrogant to believe that you are so beautiful, that you must have a nasty attitude with every man who approaches you because you are just too fine for him to walk away after you to reject him once.

So although there are thirsty men out here, the next time you hear a woman talking about how thirsty guys are, just ask yourself one question. “Is every guy who approaches her really being that thirsty or is she just conceited as hell?”