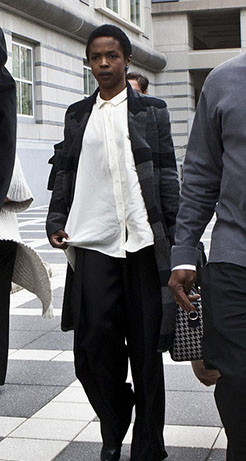 If you go to Youtube and type into the search field: “Lauryn Hill at the Apollo”, the first clip that will appear is an aged video recording of a 13 year-old Lauryn singing on the stage of the world famous Harlem theater. This is pre-Sister Act, pre-“Killing Me Softly,” and pre-Miseducated Lauryn Hill.   About halfway through she had begun to slip off-key, and the notoriously rough Apollo crowd starting booing. In what could certainly be looked at now as a make-or-break moment for her, she defiantly pulled the microphone from its holder, took a step forward and belted her way through the remainder of the song.

She regained the musical key and displayed an extraordinary amount of confidence in herself, and when the song ended and the final note disappeared into the air, the entire Apollo crowd was engulfing her in cheers.

Throughout the ‘90s, Lauryn Hill experienced a truly meteoric rise to the top of the entertainment industry with major acting roles, platinum albums and Grammy awards in tow. However the 2000s would not be as kind to Ms. Hill. She appeared to suffer a series of emotional and mental breakdowns due to the stress brought on by fame and fortune (Mo’ money, Mo’ problems…).

Hill has toured and performed intermittently over the past decade but often to mixed success at best. She has been regularly accused of frequent tardiness (sometimes up to two hours late) and even not remembering all of the words to her own songs. Her problems have recently become compounded as she now faces a new challenge, this one with the IRS.

According to court documents, Hill is over $500,000 in debt to the United States government. Her sentencing date has been postponed to May 6, giving her added time to pay. However, with the acquisition of a brand-new million dollar deal with Sony Records, help may be on the way. Lauryn’s attorney is asking the judge for probation on the grounds that with this new recording deal, Hill will be in a better situation to pay off her debt if she is free and working, rather than behind bars.

Though she is not the first celebrity to not pay taxes for some reason (think Ronald Isley and Wesley Snipes), it just seems odd that someone of Lauryn Hill’s fame and economic stature in life would neglect to pay taxes. As the presiding judge for the case, U.S. magistrate Madeleine Cox Arleo noted, Hill is “not someone who stands before the court penniless.”

To state it simply, she earned nearly $2,000,000 during 2005-2007 (the years in question on her tax returns). Hill has posted a response on the online blog site Tumblr, saying that she had “gone underground” to “live without being manipulated and controlled by a media protected military industrial complex with a completely different agenda.”

On May 6, Lauryn Hill’s fate will be decided. She faces several years in prison if convicted. One thing is for sure, it would be a shame to see someone who is headstrong enough to survive the scrutinizing clutches of the Apollo audience only to succumb to internal pressures after gaining the very rewards for which she started doing it in the first place. After all, one only has to go back to Youtube and type in “Young woman loses cool on Showtime at the Apollo” to see what else could have happened to Lauryn Hill that fateful evening in 1987.

Over the weekend Lauryn Hill released another statement via her Tumblr, ahead of her sentencing.  Read the entire statement below:

“It has been reported that I signed a new record deal, and that I did this to pay taxes. Yes, I have recently entered into an agreement with Sony Worldwide Entertainment, to launch a new label, on which my new music will be released. And yes, I am working on new music.

I’ve remained silent, after an extensive healing process. This has been a 10+ year battle, for a long time played out behind closed doors, but now in front of the public eye. This is an old conflict between art and commerce… free minds, and minds that are perhaps overly tethered to structure. This is about inequity, and the resulting disenfranchisement caused by it. I’ve been fighting for existential and economic freedom, which means the freedom to create and live without someone threatening, controlling, and/or manipulating the art and the artist, by tying the purse strings.

It took years for me to get out of the ‘parasitic’ dynamic of my youth, and into a deal that better reflects my true contribution as an artist, and (purportedly) gives me the control necessary to create a paradigm suitable for my needs. I have been working towards this for a long time, not just because of my current legal situation, but because I am an artist, I love to create, and I need the proper platform to do so.

The nature of my new business venture, as well as the dollar amount reported, was inaccurate, only a portion of the overall deal. Keep in mind, my past recordings have sold over 50,000,000 units worldwide, earning the label a tremendous amount of money (a fraction of which actually came to me).

Only a completely complicated set of traps, manipulations, and inequitable business arrangements could put someone who has accomplished the things that I have, financially in need of anything. I am one artist who finds value in openly discussing the dynamics within this industry that force artists to compromise or distort themselves and what they do, rather than allowing them to make the music that people need. There are volumes that could (and will) be said.” – MLH

Update:
Lauryn Hill was sentenced on May 6th to spend 3 months in Federal Prison for tax evasion.  After she is released she will have to spend an additional 3 months on house arrest followed by 9 months of supervised release.  Hill must return to prison by July 8th to serve her time.  Seems the judge wasn’t interested in taking pity on her because of her 6 children.