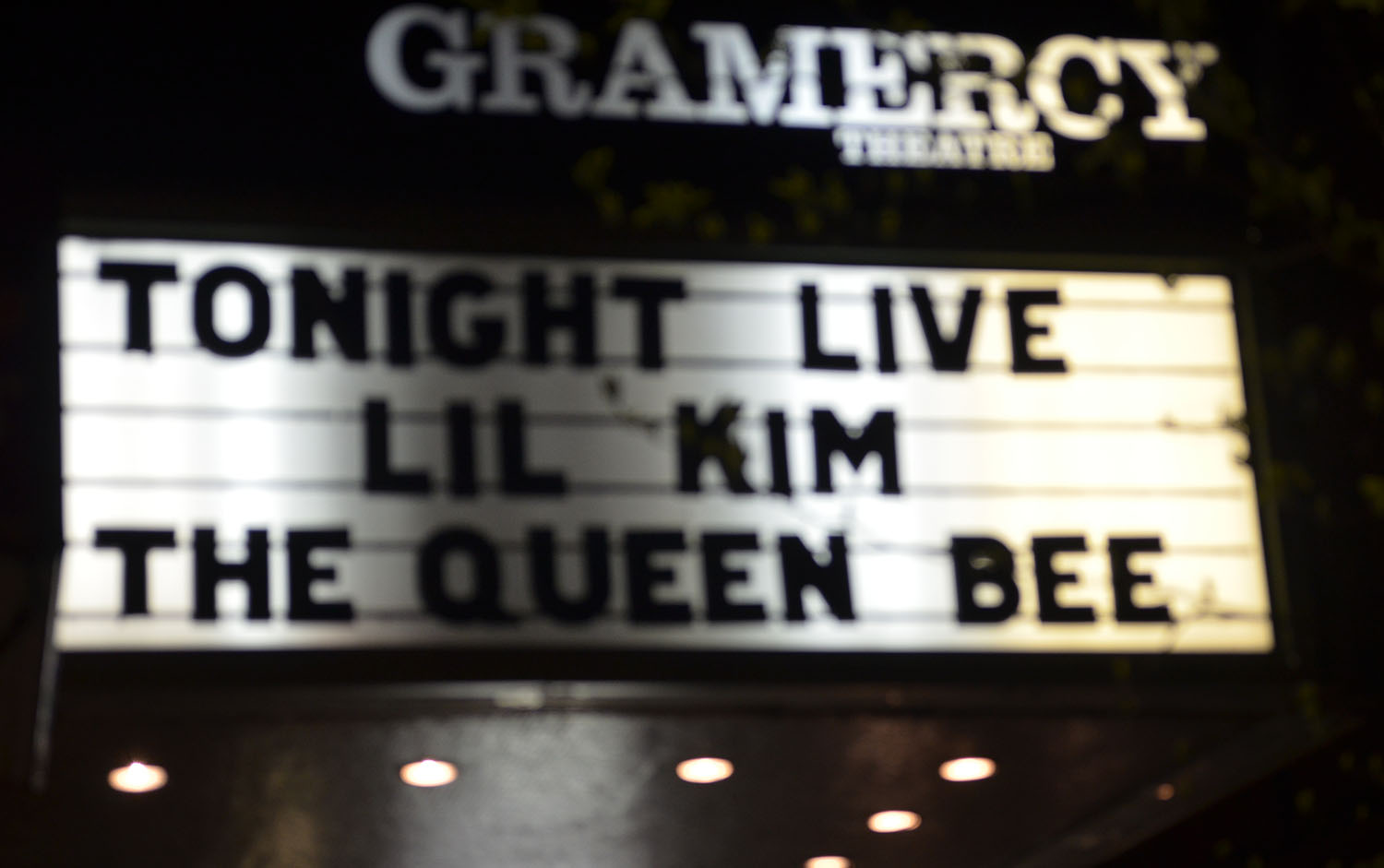 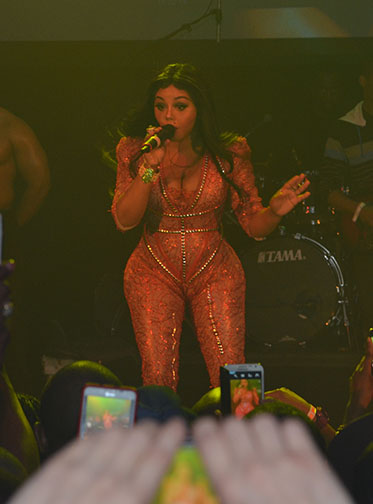 Friday night was a New York type of night! First, the New York Knicks won their first road playoff game in over ten years, to take a commanding 3-0 game lead over the Boston Celtics in their first round match-up. Then, Gramercy Theatre welcomed Hip-Hop legend, Lil’ Kim for her first solo show in the city for at least a few months. The show wasn’t heavily publicized and Kim acknowledged that she really only had 2 days to prepare, but New York City (and Jersey) faithful showed up to support the Queen Bee. Hip-Hop executive, Kevin Liles, was also in attendance for the nearly at capacity show.

It’s been years since I’ve witnessed a Kim performance, televised, online, or wherever, and having released very little since her 2005 offering, The Naked Truth, I had no idea what to expect from her on this night. However, I was sure she wouldn’t disappoint, as did most of the long time Kim fans in the building.

Doors opened at 10pm, but Kim didn’t make it to stage until well past 1am, Some unfortunate fans were far too intoxicated to even stick around for the performance–their loss. What they missed was a close-up of Lil’ Kim in one of her most provocative outfits to date. The red body-suit (?? Really at a loss for words to describe it) hugged her body, revealing every curve and crevice of her petite frame. Fans of both sexes oohed and ahhed when she finally sauntered on stage. And whenever she turned around, I for one found it hard not to stare at the booty R. Kelly once cradled and displayed in his video for the ode to the buttocks, “Feeling On Your Booty.” 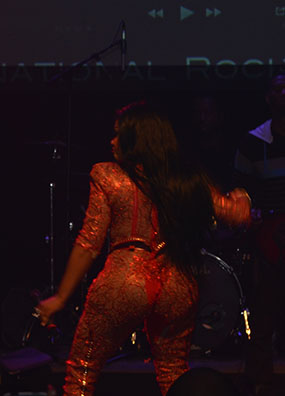 Her set started out rocky, with a very extended intro before she appeared out the back to do a rendition of “The Jumpoff.”  When she got through her first track, she mysteriously disappeared to the back once again, taking a few more minutes to gather herself and return to do the rest of her performance. Might have been caused by technical difficulties or a slew of other things, but even her most passionate of fans began to show signs of frustration.

Right when she seemed to be hitting a groove in her set, Kim decided to slow things down to talk about her artist, Tiffany Foxx. Foxx, the first artist to represent Kim’s new label International Rock Stars (I.R.S.).  Unable to make an appearance that the Gramercy, foxx prerecorded a video message which Kim played for all.  Keeping things within the I.R.S. label, Kim introduced another artist Young Goldie, to perform his latest single, “Keep It 100,” which featured Kim.  While the audience wasn’t familiar with the record, the song was a catchy rap, so fans didn’t sway too far from her on it.

Kim followed up with some of her many hits, including “Crush On You,” “Lighter’s Up,” “Big Momma Thang,” “Get Money,” and “It’s All About The Benjamins.”  This part of the set was dedicated to the lifelong fans and they sang along to every word.  Kim thanked her fans often during her set.  Not just for supporting her on this night, but for supporting her throughout her career and through the ups and downs of her career.  She ended that stretch of music with a tribute to the Notorious B.I.G., playing songs like, “Warning,” “Juicy” and “Unbelievable,” taking the audience back to the golden era of Hip-Hop. 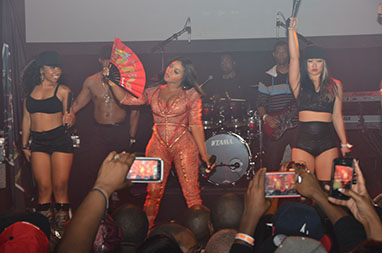 The show wouldn’t be complete without a few shots fired, not literally of course, but after a quick final visit backstage, Kim returned on stage with dancers and handmade fans for a  quick reminder that she is the Queen Bitch.  She performed her Nicki Manaj statement track, “Black Friday.”  Not that it required much reminding, but it was great to see Kim still going for the neck any chance she gets.

She chose a surprise close-out track, finishing things off with “Magic Stick.”  Not quite how I expected things to come to an end, but by that hour, it was a timely ending for Kim on this day.  Today, was truly a good day.

More images from the show: 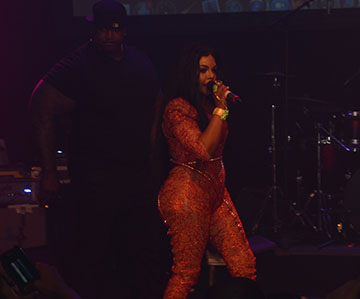 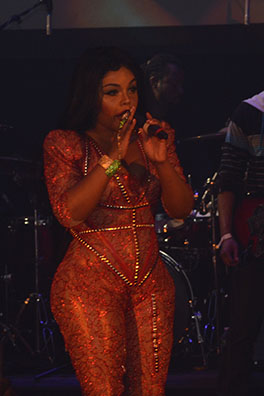 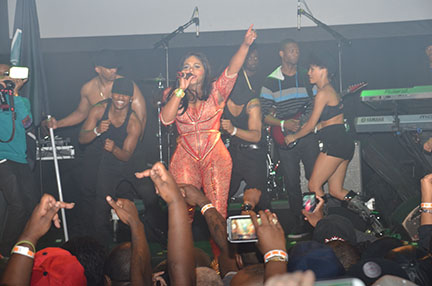 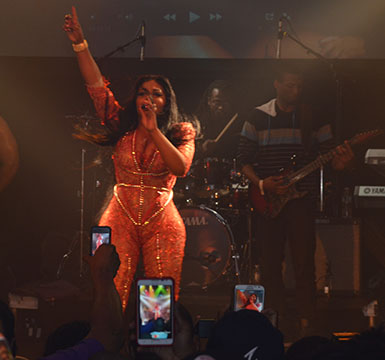 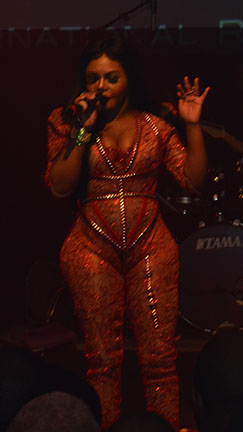 Video footage from the concert intro…