Hot 97’s annual Summer Jam concert is reserved for Hip-Hop and R & B’s biggest and brightest stars who have made a big impact in the first half of the year. The trend continued for 2013 for Summer Jam XX, an epic anniversary of the concert that represents ‘Where Hip-Hop Lives’.

The surprises and guest appearances [see more here] were plentiful and one by one, the featured artists tried to out-perform one another, making MetLife Stadium a true venue for showmanship.

In the end, French Montana announced, “No disrespect to any of the artists that performed on this stage, but I’m about to kill this.  I’m from New York, so it’s only right.”  Well intentioned, hs set was actually cut short, reportedly due to weather conditions.  While he had a great show, it was mostly due to his surprise guests.

The night belonged to Kendrick Lamar it would seem.  Performing a slew of cuts from his Good Kid, m.a.a.d. city album, Kendrick, the skinny dude from the West Coast, performed through the rain and with dark lights, but his presence proved to be enormous.  He was also the culprit behind the biggest surprise of the night, albeit for all the wrong reasons, a surprise Papoose performance.

Full images of the Summer Jam XX performances below… 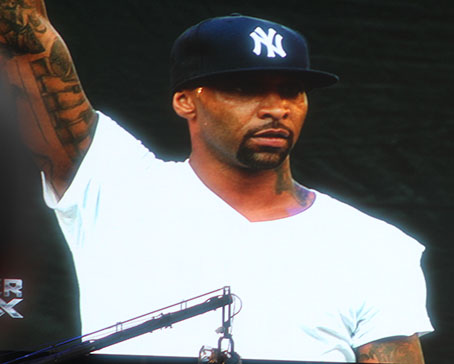