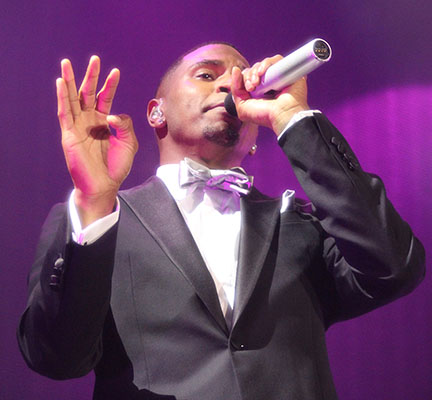 When Trey Songz hit the mainstage at Essence Fest 2013, its safe to say that the ladies went completely wild throughout the entire Superdome. Dressed in an elegant tuxedo, Trey joined Maxwell, New Edition and Charlie Wilson in the extra sharp tux look. The looks got the women screaming, but the music and showmanship kept the audience–males and females–on their feet and applauding.

Trey sauntered on stage with a performance of “Say Aah,” singing and flowing with the crowd serving up as his background vocalist. He followed it up with “Need A Girl” to slow the groove up and help loosen up.

Next, he took a momentary pause to introduce the trailer for his new film Baggage Claim. The David E. Talbert film stars Paula Patton and Taye Diggs, with appearances from Trey Songz, Boris Kodjoe, Derek Luke and Jill Scott. The film hits theaters on September 27th of this year.

Trey then introduced the world premiere performance of his new single, “Sensational,” a nice ballad that is sure to take over the radio in the coming months.

From there it was back to the classics. With the remaining 45 minutes of his performance he went on to do songs like, “Can’t Be Friends,” “Neighbors Know My Name,” “Dive In,” “Bottoms Up” and “Love Faces.”

Safe to say, the fans were pleased. YUPPPPPPP…

Check out images from the performance here…