Skip to content
Home » We Shall Overcome, But When And How? 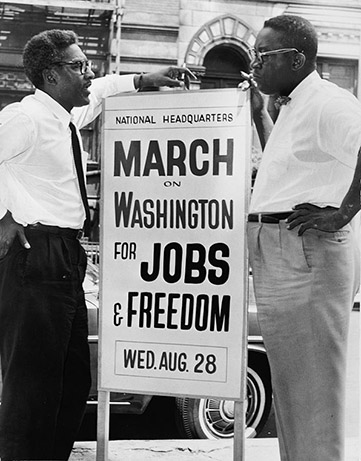 With the 50th anniversary of the March on Washington, DC approaching, we must look at some of the changes that have taken place within the Black community since the march. Have those changes been for the better or have we remained in the same place for 50 years now? Some would say there have been many positives, which there have been changes, but at what cost to the community have those changes been made? The unity of the Black people has dwindled from entire communities, to a respectful handful of individuals. The idea that we have arrived and are now accepted now permeates through our community, while so much from the past remains the same.

When the Black community looks at ourselves we should ask a very important question, have we become self-oppressed due impart to being complacent?  This is something that has taken over our entire community from the very empowered to the least empowered. Black people have routinely self-oppressed with this complacency. We tend to have jealousy and infighting with each other, idle forms of competitiveness, the unwillingness to work with each other, not supporting each other. We latch onto the struggle of others before we will unite for our own struggle.

Recently, the Supreme Court repealed The Voting Rights Act of 1965, which will directly affect our community. We now see that the “poll tax,” a system used to disenfranchise Blacks, has essentially been brought back into effect with the passage of the voter ID law, also the changes in the early voting practice that so many African-Americans take advantage of has been changed . These new law changes go directly against what the past generation fought for. In addition, because of the complacency, we have no leadership to look to for a voice and we have no united agenda to put forward to the authorities and the elected officials in charge. This form of complacency comes into play in a situation like this because instead of coming together as a community we will sit back and hope someone will fight for us.

Has it become the norm for the Black community to only react and not be proactive? If we take a serious look at the things that still plague our community it is the same things that the past generation was fighting for 50 years ago, such as the right to fair and just voting rights, as well as equal and fair treatment in the justice system and education. We still have some of the worse schools in our neighborhoods, which coincide with how desegregation was implemented, but not in the way that civil rights leaders intended.  there are still unfair police policies and procedures  that target our community. In addition, the war on drugs, which has been a direct counter measure to the civil rights movement and the mandatory minimums that our Black youth have been the victim of for so many years.

When will we overcome, will it take another revolutionary type act to jump-start the Black community. Can we keep sitting around accepting the status quo and just being complacent to the detriment of our entire community? The time has come for the community to realize that until we must come together as a people things will not change. We have to create the change and that change starts with every person in the black community taking a part in this new civil rights movement.