“Life is a pendulum and everything eventually swings back to where it was before.” Singer/songwriter/musician, Curtis Fields philosophy pertaining to life and the music business sets himself apart from the average artist. He has a very positive outlook on everything and believes that everyone has a predestination. Bred from Little Rock, Arkansas to a preacher father and a teacher mother, his morals and values give him an air of excitement. His core values allowed him to graduate from Fisk University and become a member of Alpha Phi Alpha Fraternity. Majoring in music was a dream he was chasing, but it didn’t fulfill his infatuation. It wasn’t until he pulled away that the force of this passion pulled him back in. Chatting with Parlé Magazine, the BET Music Matters artist talks about his life, music, goals and values.

Parlé Magazine:  For those that aren’t familiar with Curtis Fields, right from the beginning, what do you want them to know about you?
Curtis Fields: I’m a musician and I love music. [Laughs.] I call Little Rock, Arkansas home. I’m signed with Epic Records. My claim to fame is I play my Iphone as a guitar. That’s pretty much me in a nutshell.

Parlé:   You did go to college though, and graduated correct?
Curtis Fields:  Yes, I went to Fisk University in Nashville.

Parlé:  What are your core values to staying yourself?
Curtis Fields: The biggest thing is that I want to challenge my audience to think or make them think. I’m more so into empowering people into doing what they want. I believe that there is no try, only do. 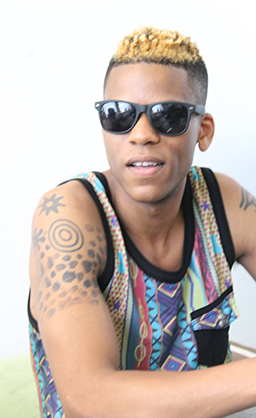 Parlé:  Is that your motivation?
Curtis Fields: I think it’s a mixture of what the universe preordains me to do and taking action to do it. I believe in fate and all we can do is follow the plan that is set for us.

Parlé:  Your musical style is mirrored of your personality, was it tailored or natural?
Curtis Fields: I had meetings with different labels and I explained all music is on the same plain. I didn’t want to stay in one concise format. I want to live in between the lines. I want to forge a space where I can live in between all the genres.

Parlé:   Do you want to be the boundary for music?
Curtis Fields: I would like to seen as such. Hopefully I can get to the point where everyone else does.

Parlé:  You incorporate an iPhone app into your music.  How did that all come about?
Curtis Fields: I was a music major in college for two years and I thought everything is an instrument. I’m used to structuring things on a keyboard. I was working an internship and a song came to me. It was way too complicated structurally to hum into the phone. I downloaded the app that I saw on a commercial. I had enough money to get the app and the song came out. I played the song for L.A. Reid and he pulled out drumsticks and started playing with me.

Parlé:  “Opposite Attracts” is you single.  Was that made in one of your spontaneous moments?
Curtis Fields: There were progressions being played and I was into it so I picked up the phone and started playing.

Parlé:   What is your thought process during creation?
Curtis Fields: It’s hit or miss. Knowing the journey to the goal is fulfilling whether it’s fun or not is what keeps the creating process going.

Parlé:   What are you working on now?
Curtis Fields: We started working on the album as soon as I got signed. I worked with the Co-Captains, Rock City, and Sam Hook. I get to bring this technology to the forefront and work with these amazing people. I must have done something awesome in my past life.

Parlé:   What more can we expect from you?
Curtis Fields: I believe everything is a pendulum and the way we want music so quickly, it will soon go back to people anticipating what more is there to come. We’re pushing the single and getting my music out there.

Parlé:   You have inspired the future generation to pick up a phone or tablet to play a musical instrument.
Curtis Fields: I’ve always been a mentor. I haven’t had time now to mentor but now I have a platform where I can reach those who are looking for mentors. They are taking music out of schools and the most beautiful thing about it to me is that I get to open that door for them to discover music.

[INTERVIEW] Sammie Is All Grown Up, Sharing His Story In Music & Beyond