Skip to content
Home » B Smyth – Leader of The Motown Resurgence

Motown Records is back on the map with a fresh, suave and extremely charismatic artist named B Smyth. Smyth has plans to dominate the R & B circuit with his swagger filled dance moves and impeccable vocal ability. The Florida native born, Brandon Smith began his musical journey using YouTube as his platform to cover songs from some of his favorite artists. His big break came after his cover to 2010’s R & B hit record “Sure Thing” originally recorded by Miguel caught the eye of Hip Hop blog, Worldstarhiphop “Singing Talent Of The Week.” Since then, B Smyth hasn’t looked back, flying cross country to meet with every record label to see where he would call home. Finally settling with Motown Records, Smyth has incredible shoes to fill following legends of Motown Records such as Diana Ross, Marvin Gaye and The Four Tops just to name a few.

His first single “Leggo” featuring 2 Chainz amassed over four million views of his YouTube page and was a smash for the young R & B singer. Following up with  “Gettin That,” Smyth  showcased his amazing dance skills and incredible ability to captivate an audience. Another single, “Letter” presents B Smyth on an intimate level and embraces his versatile vocal ability. On October 15th the R & B heartthrob released a collection of music titled Florida Files. The highly anticipated mixtape has many discussing whether Smyth may truly be the new face of R & B.

Before his signing with Motown Records, Brandon was a normal teenager with a love for singing that began later than usual. Singing began in a high school chorus class and he later realized the potential of being an R&B sensation as the female attention he received at school increased. His original love was basketball but as true callings often do, the passion for music kept calling.

“Music was something I had a passion for, but I thought I was going to the league playing basketball,” B Smyth admits. Shortly after this hoop star turned aspiring R & B singer began his journey to singing stardom on YouTube, his channel “BSmyth1000” is where he posted his covers for songs from some of his favorite artist such as Usher. Chris Brown and Frank Ocean. His already blossoming fan base expanded with more recognition and this lead to several major opportunities for the singer.

After being courted by every major recording label in the industry, Motown Records ended up with the winning bid.  In 2012 B Smyth made his leap onto the scene with his first single “Leggo” which featured 2 Chainz. An up-tempo record with a catchy chorus and a video that was captivating to say the least.  Smyth had the formula for mainstream success, once the record released it was an instant success. Four million YouTube views and .. Singles  sold equated B Smyth was ultimately ready to begin his musical genius. Following his single was a track titled “Getting That” which gained tons of attention even drawing comparisons to R&B greats such as Usher and Chris Brown, a comparison in which he’s humbled by. “Being compared to them especially so early is definitely an honor” said Smyth. 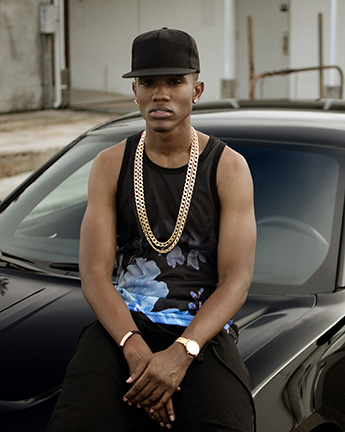 In the Summer of 2013 B Smyth turned the heat up once more releasing a few more singles just to remind us that he was here to take the throne of the Prince Of R & B. First was a ballad titled “Letter,” which shows Smyth in an intimate setting as he composes a love letter for his someone special. Showcasing his vocal ability on this track as well, Smyth’s versatility becomes almost impossible to ignore. Exclusively released to Vibemagazine.com was his newest single “Vibe,” by far his best work. Detailing  his battle with commitment and the everyday struggle of a young man searching for something and someone different. “I’m just singing about things that any twenty-one year old young man is going through,” he explained.

Florida Files, his latest mixtape has already found him a slew of new fans.  Listeners can expect to hear the flavorful tracks they’ve come to know and love from B Smyth as well as some unexpected surprises. Production on the project included Mike WiLL Made It, and features include one of the hottest artist in the industry in Future on a track titled “Win, Win” along with some other surprises. The consistency that B Smyth leaves fans to only believe that this mixtape will be nothing short of extraordinary.
Motown Records scored  big time when B Smyth came aboard their team with his limitless amount of dancing and singing ability. From his YouTube cover videos to the single featuring 2 Chainz and now the Florida Files mixtape, B Smyth has simply defined the phrase “hard work pays off.” As one of the rising stars in the R & B circuit Smyth has extreme amount of goals to accomplish and the drive and determination to accomplish them. Providing the industry with a breathe of fresh air and a chance to watch the progression of a an amazing talent. As he takes the journey to become R & B’s best out we can only sit and watch this young talent as he attempts to follow the footsteps of the legends that came before him. He leaves no doubt in anyone’s mind that he has exactly what it takes to become the best the industry has to offer. Get your ears and eyes ready to witness the rise of the new prince of R & B, B Smyth.

Also Check Out:
Chalie Boy – A Takeover Waiting To Happen
Being Glenn Lewis – Motivated By The Fans
Charlie Vox: Redefining R&B and Soul