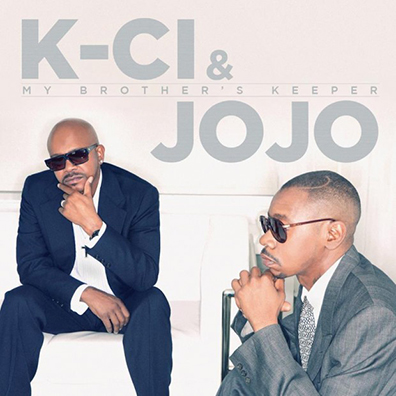 A new K-Ci & JoJo album wasn’t exactly anticipated, especially after having been away from music as a duo seemingly since their last studio effort Emotional, which was released back in 2002. While they’ve still been making strides with a solo K-Ci album, a duo album released in Japan in 2008, and a reality show about their struggles with addiction on TV One in 2010, a new album seemed like it would never be released in the states. Though not expected, for a fan like myself, the new project, My Brother’s Keeper is greatly appreciated.

Listeners shouldn’t expect the nostalgia of old to return on this project simply because it is K-Ci & JoJo. If you’re looking for “All My Life” & “It’s Real” then you are better off picking up those albums. The duo satisfies the appetite of those listeners seeking slow grooves and grown folk themes and only looks to infuse the synths and styles of the new era in the slightest ways possible.

The album’s single, “Knock It Off” is slightly more up-beat than the rest of the album, a two-step friendly braggadocious jam, which highlights the unique voices we’ve come to love from K-Ci & JoJo.

The album’s title track, “My Brother’s Keeper,” may be the stand out for the project. A deeply personal look at the relationship the Hailey brothers have with each other, they sing about having each other’s backs through the ups and downs. “When I walk through the fire/At my lowest moment/when the partys over/ you was there for me…” Even Nino Brown can learn a thing or two from them about what brotherhood means. They also take time out to thank their parents for the bond they’ve developed.

There are no features on the project, clearly none are necessary when you think of the vocal range of the brothers. A variety of writers and producers help influence this fifth studio album, but the album’s co-executive producer, Roger “Mista Raja” Green, Jr. has a big hand in the overall project. Writer, Michael “Smoov” Bell and High Octayne Musik Productions also figure into the project on several tracks.

My Brother’s Keeper receives a PARL

Check Out the video for the single, “Knock it Out” here: