When Kidd Kidd stepped into the front of the New Orleans music scene he was determined to be heard. Kidd Kidd was one of the first artists signed to Lil’ Wayne’s Young Money Records with members Gudda Gudda and T-Streets as the group, Sqad Up back in 2002. In fact, in 2008 you can hear his verse on Lil’ Wayne’s hit, “Mrs. Officer.” Originally from the south side of New Orleans where he was introduced to the streets, Curtis Stewart aka Kidd Kidd had to find ways of survival. The gift of putting words together over an instrumental was his ticket out of his hostile situation. He chose to surround himself with people who would uplift him rather than pray for his downfall.

After two unsuccessful attempts with Young Money Records and the will to sustain in an untrustworthy industry Kidd Kidd decided to go back to his hometown and do what was familiar to him to survive. “The situation with Young Money didn’t work because there are people that sell you dreams but can’t come through. We will always be cool because those are my people but I had to look out for me,” Kidd Kidd recalls of his time with the Cash Money/Young Money family.

In 2011, 50 Cent approached him with an opportunity to continue to live out his dream. With the thoughts and feelings of having another chance Kidd Kidd was on cloud nine. At a family gathering in New Orleans he was the victim of a shooting and came close to losing everything that he worked so hard to achieve. He was shot 6 times in the leg and abdomen.  This came after the 50 Cent meeting and it seemed to be ironic but a blessing. After a few months of recovery, the incident left him with the strength and determination to continue and push on.

Signing with G-Unit Records in 2011, Kidd Kidd was determined to create something of substance. “50 always had his eye on me so when he approached me with the opportunity, I had to pounce on it,” Kidd Kidd offers. He immediately got to work on putting out new music. Shortly after his signing he was featured on Tony Yayo’s single, “Hater” and his been featured on multiple 50 projects subsequently. “50 is like a mentor to me, he gives me advice on how to approach a song and make what people want to hear,” he says of his relationship with the other Curtis. 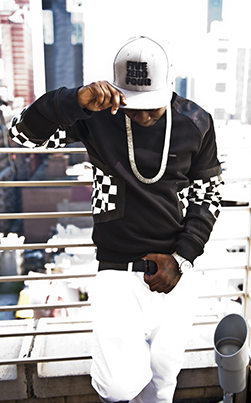 With the newfangled opportunity Kidd Kidd is releasing music that is bound to gain him a fan base. His latest single, “Bury Me a G,” has the making of a hood anthem embedded with loyalty to the things that made him a man. “There’s this OG from my town, every time I go to him with some new music he gives me tough love and that gives me the motivation to make every record better. Once I have his approval then I know it’ll be a hit.” Having the influence of those who care about having a positive outcome has proven outstanding in his case. His upcoming mixtape, Street Fame will be on the streets soon as he continues to expand his listener base.

For fans and those who are looking for something different than what’s on the radio, Kidd Kidd is doing what he can to keep you entertained. You’ll be taken in by the rasp of his voice and the way it meshes well with the tracks that he has released. With the heating up of other New Orleans artists such as August Alsina and Dee-1, Kidd Kidd is making sure he forges ahead to create gems for his town. As he put it, “We’re some young guys wanting to follow our dreams and share our story with those willing to listen.”