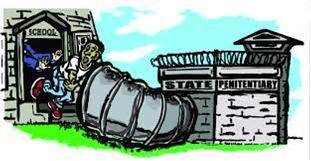 The many ways of sending young Black men to prison is ever changing and new, improved techniques are being discovered daily.  The latest way to send young Black men to prison is to groom them early in the system and what better place to do that than in the school system. The young Black man has to be taught that his place in life is to be subservient to the system at hand and if they are not, there is a place to drive this point home. They have to be taught that the mistakes and miscues they make come with certain but unique consequences. Consequences that might not apply to other races, the behavior of students is not addressed only punishment, which breeds distain for authority and sends a bad message to the child.

The school to prison pipeline is a very real epidemic that is plaguing schools across the nation. Students are suspended, expelled and even arrested for minor offenses that make visits to the principal’s office seem outdated. These new zero tolerance policies disproportionately target students of color mostly young Blacks and in most cases Black boys. These Black boys are for the most part coming from home environments that have a history of neglect, poverty, abuse or some type of learning disability.

Students of color face harsher discipline and are more likely to be pushed out of school than whites are. 40% of students expelled from U.S. schools each year are Black, 70% of students involved in “in school” arrests or referred to law enforcement are Black or Latino. Black students are three and a half times more likely to be suspended than whites are, and Blacks and Latino students are twice as likely not to graduate high school as whites are. In the prison system, 68% of all males in state and federal prisons do not have a high school diploma. These glaring statistics jump out when we look at the school to prison pipeline dilemma.

When these kids are sent home for their perceived disruptive behavior, they go back to places where there is unhappiness, houses and neighborhoods filled with negative influences. Then the young boys, which are forced out for minor offenses become more callus and bitter, they often become stigmatized, lose focus on their studies and some eventually drop out altogether. This increases their chances of becoming part of the criminal element in their neighborhood because their perception of how authority treats them has been warped.

There is no mistake that we now spend almost $70 billion annually on incarceration, probation and parole. Compare that to just a 21% increase in funding for education for higher learning. What it amounts to is there is more profit in enslaving our youth in the prison system than there is to teaching them how to be productive citizens. While it is easy to think that the school the school to prison pipeline only affects certain students and their families that is not true our entire society will fell these consequences. The youth of today could be the very promise of tomorrow and their greatness cannot be recognized if they are not being taught in school.

Also Check Out:
War on Drugs Effects on the Black Community
Family Loyalty (Where Does It Start and Where Does It End?)
An Evening with the Legendary Mr. Melvin Van Peebles
Fire… Fire… Not Really! Early ObamaCare Issues
Bad Relationship: Why Did You Stay So Long?