Skip to content
Home » At Home with the Byrd’s: A Christmas Story

This has been a great year for Mr. & Mrs. Byrd. Kevin Byrd, an award winning actor and the founder of the Brown/Byrd Prostate Cancer Foundation has been dedicated to his career towards making a difference. This past February, the world famous Niagara Falls illuminated its waters in blue in honor of the Brown/Byrd Foundation International Prostate Cancer Observance Day and Kevin was awarded the Community Outreach Health Care Hero’s Award of Long Island Business News. Verizon Fios also recognized him as a hero of Long Island. He did a video segment highlighting his work. The segment made international headlines. In addition to that, Kevin was inducted into the Congressional Record and became the first African-American male to receive an honorary street in his hometown of Utica, NY.

Today, the holiday season is in full swing for Kevin & Karen. The holiday season for them is a fun time of the year filled with parties, celebrations, and social gatherings with family and friends. But for many people, it is a time filled with sadness, self-reflection, loneliness, and anxiety. The holiday season often presents itself to be more than many of us can afford or endure. Most Americans have a distorted view of Christmas. With this being their first Christmas together as a married couple, there insight on the real meaning of Christmas means so much more. And their message this holiday season should speak to every one of us. 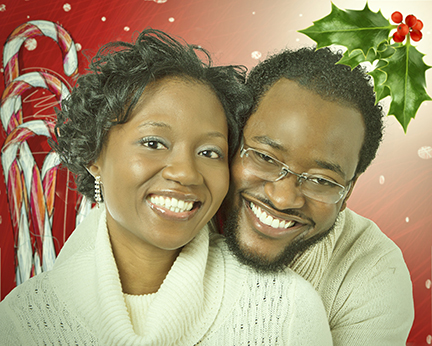 The Meaning of Christmas According to Kevin & Karen Byrd
Most folks are familiar with the Christmas story and can give a biblical account of the events surrounding the birth of Jesus Christ. What is the real meaning of Christmas? Well the best way to answer that question is through the biblical passage:

“For God so loved the world that he gave his only begotten Son, that whosoever believeth in him should not perish, but have everlasting life.” No one could out do what God has done. No one could give a greater gift than God has already given.

Christmas means a lot of things to a lot of different people. To some it is a time of shopping and spending, a time of drinking and carousing, a time of traveling and entertaining.

To me, Christmas is a time of remembering. Remembering the great love that God had for each and every one of us. He loved us so much, that He spared not His only Son that we might be saved. Remembering the uniqueness of
his life, his teachings, his miracles, his prophesies, his death and resurrection. Secondly, to me, Christmas is a time of loving. People make a special effort to be a little, kinder, a little more considerate of others, and a little more generous during the Christmas season. They get involved in such things as Christmas caroling, toys for the needy,
meals for the misfortunate, etc. It is a time for reaching out to others with love and concern.  God so loved the world-let us never forget that!!! So should we care as He cares. So should we love, as He loves. It is also a time of giving. For God so loved the world, that He gave…Love cannot look with indifference on the hungry, and the sick, and the lonely, lost souls of this world. Love must give. Last but not least, Christmas is a time of forgiving. God was willing to forgive us. He was willing to show mercy to a sinful, lost, and dying world.

In today’s society, many people are crying out in desperation, “Isn’t there anyone out there who can tell me what Christmas is all about?” Like most folks, Charlie wasn’t having a good Christmas. Nothing was going right. He complained about all the materialism. No one seemed sympathetic. Everyone else’s happiness just made him feel worse.

In a blink of an eye, the holiday season will be amongst us and will capture the imagination of hearts longing to unwrap foiled packages under the Christmas tree. Perhaps this holiday season, you’ll place love, remembrance and forgiveness under your tree. You’ll be sure to have a promising Christmas if you do.

[INTERVIEW] Back For An Encore, Akon Opens Up About His Musical Renaissance

Kevin Benoit has 1833 posts and counting. See all posts by Kevin Benoit