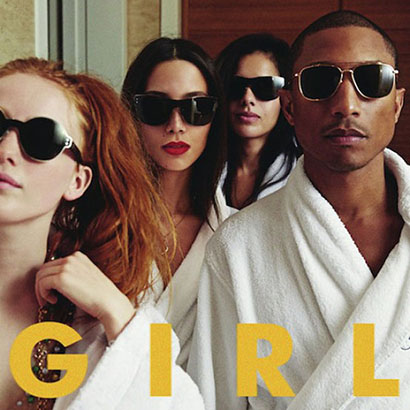 G I R L by Pharrell is an enjoyable album. The second of his solo projects, there is an engaging assortment of songs within it that reinforce his creative ingenuity. There is a feeling however on the album that Pharrell sought to withdraw from the mainstream light – creating a lively experience that is not only centered on fun and games, but in his decision to do so, ended up serving up cuts that are relentlessly and definitively radio friendly.

On “Marilyn Monroe,” the opener, Pharrell takes the listener on a journey through enraptured violins while celebrating women. “Brand New,” adds Justin Timberlake amidst an airy and bouncy beat that offers the urge to dance the samba. “Gush” is full of the usual Pharrell elements, while “Happy” is one of the catchiest songs on G I R L and in the R&B and pop genres. The violins return on “Gust of Wind,” only on this piece, there are more of them adding a symphonic magnitude that “Marilyn Monroe” does not have. Daft Punk integrates their uniqueness to the song also producing sonic harmony.

“Know Who You Are,” which is a duet with Alicia Keys, unsurprisingly feels as if it could have been featured on earlier Neptunes collections and on Alicia Keys’ Girl on Fire album. The closing song “It Girl” is an applicable and dignified celebration of the feminine gender.

Creating a concept album is a difficult feat. As easy as it is to say that artists can do it at the drop of a hat or with the snap of a finger, they take work. Pharrell imbibes a retro Ohio Players/Jimi Hendrix feel with G I R L combined with a contemporary vibe. It is new Pharrell – make no mistake about that – coupled with the formulaic audacity that gave him prominence not only as a producer but a writer as well.