Skip to content
Home » When Celebrities Attack – Is It Ever Justified? 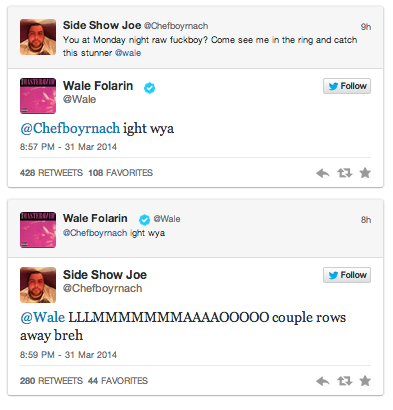 Recently, there has been many cases of celebrities attacking their fans. Rihanna, Chris Brown, Kanye West and A$AP Rocky were examples of artists attacking hecklers and/or fans. Mayback Music Group artist, Wale, has become the latest artist to be caught in a scandal involving violence against a fan. The altercation between Wale and the fan, known as Side Show Joe (@chefboyrnach), took place in the stands of a WWE Monday Night Raw show and began after mentions were exchanged between the two. In the mentions, Side Show Joe insulted Wale, sending him a tweet telling him “meet me in the ring f*ck boy”. Wale then responded by asking the fan where he was seated, then met him where the confrontation ensued. Witnesses nearby said that Wale immediately started punching the fan. While it is hard to tell from the video whether or not an actual fight took place, a heated altercation definitely took place at that moment. While situations like this are great for the entertainment of those at home (and also great for bloggers), one must ask an important question. Are celebrities at fault for fighting fans, or do some of the fans bring these situations upon themselves?

You cannot have this discussion without bringing up the situation that Kanye West found himself in at the beginning of the year. In January, Kanye assaulted an 18 year old fan after his fiancé called him complaining about the teenage fan insulting her and using racial slurs. Kanye West eventually settled the case out of court, however many people had mixed feelings. While some people felt that the kid deserved to be hit for instigating Kanye, others felt as though this was the moment that proved that Kanye West was out of control. This is the usual debate whenever a fan is hit by a celebrity. Even when the fan has instigated the fight by either throwing something at them, or directly insulting the celebrity, most people will say the celebrity is wrong for retaliating. Then there will be more problems for the celebrity once legal action is taken. Kanye West have learned this the hard way after having to pay over $250k in a settlement. While some may argue that the price of the settlement is small compared to Kanye West’s net worth, the sum could have been much larger if the battered fan decided to go to court instead of going for the settlement. Celebrities also have to think about how receiving an assault charge would hinder their careers at the moment. One has to wonder if this scuffle with a heckler will have negative effects on Wale’s career at the moment.

It is apparent that celebrities will always be targets for internet trolls and hecklers. This is something that will remain true as long as fans can directly interact with famous people on websites like Twitter. However, it is up to celebrities such as Wale to choose to ignore the hecklers and trolls, although they may reach the point where they have had enough. While some may argue that some of these fans deserve a good beat down from time to time, celebrities have to recognize the end result and main goal of these altercations; receiving a decent sum of money from the celebrity who took the bait and hit them. So whether one believes that Wale is justified for attacking the fan at Monday Night Raw, or that he should have kept his cool, let’s just hope it doesn’t have any severe negative effects on his career.