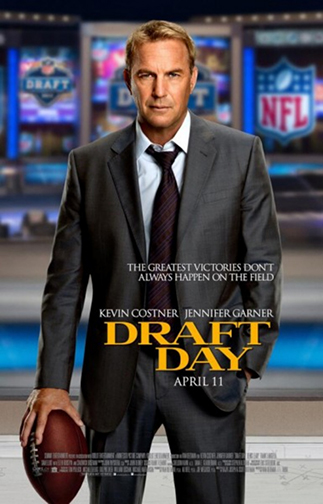 For me, I went into the theatre not really knowing what to expect. Yes, some football, hopefully some excitement. What I was not expecting was a real life rendition of how crazy, intense and nerve-racking that 24 hours before the first pick on draft day can be. I felt like I was there, in the small crevasses of a real NFL draft day. My nerves were just as rattled as the characters’ seemed to be. Oh, and it helped that New York Giants wide receiver, Mario Manningham, who hosted the screening, sat directly in front of me.

But listen, don’t get it twisted, don’t think of this as a “football” movie. You don’t have to be a football fan, you don’t even have to understand football – not sure if it was intentional, but director Ivan Reitman found a way to package a crash course into the film. All you have to do is sit and watch and I’m almost sure you’ll be captivated until the last minutes, which are by far the most strenuous.

General Manager, Sonny Weaver Jr. (Kevin Costner) of the Cleveland Browns is under major pressure to bring Cleveland back from their bad streak. While trying not to let his late dad, the former GM of the team down, he has just 24 hours to make his final decisions for the Brown’s, decisions that will shape the teams’ future. As he engages in last minute trades with teams like the Jacksonville Jaguars and makes shocking moves without the co-sign of anyone, you’ll be twisting and turning in your seat while the clock ticks down. His entire crew believes he’s gone mad and I’m sure you will too at some point.

You’ll be introduced to a few types of players. Types of players that I’m sure really exist in the real NFL — the sure fire number one pick, the underdog with a back story, the guy who’s in love with football simply because it runs in his genes and the player that has got to always watch his back and keep his spot secure. As the clock ticks and you get to know each player better the suspense of how the picks will go rises and you’ll cringe wondering how he’ll do it, with the futures of these boys at his fingertips, how will he manage security and contentment for everyone? Weaver reminds us – “No one can stop a ticking clock, but the great ones always find a way to slow it down.” (My favorite line of the entire film – we can relate that to life, no?)

There’s so much in the film, something for everyone. Like Weaver’s love affair with the very likeable character Ally, an appearance by our favorite Hip-Hop mogul, Puffy, the geeky intern who is ejected into the middle of the madness of draft day, barely surviving and the comedy that fills the movie right up. The film is intense, at times emotional and above all hilarious at the perfect moments.