Skip to content
Home » Wheelchairs Against Guns, Making a Difference

Kareem Nelson, didn’t tell the typical childhood story I expected to hear in a recent interview with the Wheelchairs Against Guns (W.A.G.) founder. He described a great childhood, a mother that provided everything he wanted and needed, if not more. As an only child, he said he had the best of everything, but the “streets” were still calling. “I chose the streets,” Nelson admitted. There was a sense of brotherhood and freedom that led him to the lifestyle that so many of our young Black men follow. Fast money, cars and women is the name of the game and where so many get caught up. For twelve years Nelson was about that life, until one night everything changed.

He flashes back almost 20 years ago and recalls a time when robbing a rival drug runner and taking over a set of project housing units sounded like a good idea. He was strapped and ready for the fight, but became frustrated when things didn’t go as planned. Maybe his guard was down, maybe he was distracted—the next thing he knew was that he was being rushed to the hospital. When the dust settled and reality came into focus, Nelson was left was a severe spinal cord injury that left him bound to a wheelchair, forever, as C-7 quadriplegic.

“Life didn’t seem pleasurable anymore,” he explains his feeling when the doctors gave him the news. Angry at the world, he chased all his friends away and was even placed on suicide watch at one point. But that was not his path and a strong faith in God, led him through the dark moments. With the help of his mother, grandmother and aunt, Nelson found the strength to carry on, rehabbing as much and as hard as he could to be fully independent.

They say it’s hard to teach an old dog new tricks, which is probably why Nelson turned right back to streets when he got home. He found himself doing the same things as before his injury, living the same life and on the same dead-end hustle. After being locked up for nearly five years, Nelson realized he had to do something different. When he thought back to the defining moment in his life, he reflected on the opportunity years earlier to attend a boarding school out of state on a full scholarship. He would have had the chance to be exposed to new things and be removed from that lifestyle he was so comfortable with. Ultimately, he chose to be about that street life and declined the offered. Hindsight is twenty/twenty and Nelson recalled, “God gives his hardest battles to his toughest soldiers.” With that in mind, he set out to make a difference because it’s never too late.

Nelson founded Wheelchairs Against Guns (WAG) in 2012. Overcoming the challenges of changing people’s perception of him being a hustler, as well as finding supporters to believe in his mission has been the most difficult part in establishing his non-profit. But where there’s a will, there’s a way and slowly WAG is gaining momentum and recognition.

WAG is a mentoring program based in New York with an underlying goal of saving our youth from the streets and gun violence. Nelson, along with Terry Parrish and Louis Lopez go to schools and speak with children about making positive choices in their lives and staying on the right track. They feel their message is relatable and paired with their personal stories—the children are gaining a valuable life lesson. WAG also stresses to love yourself, educate yourself and always pursue your dreams. 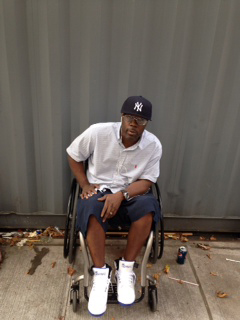 What’s next for WAG? Nelson said the push for national recognition is imminent, as is developing a renewable funding source through grants and donations. He hopes their current platform of teaching safe life choices, financial freedom and independent living to at-risk children in 4th – 12th grade, will encourage more people to help. He’s looking for role models and a spokesperson to be the face of the organization. He believes that the village is no longer in the community and parents have to start paying more attention to their children. He wants WAG to be that additional community support system that parents can depend on.

If you want to know more about Kareem Nelson, WAG or would like to make a donation, visit https://www.facebook.com/WheelchairsAgainstGunns or follow them on Twitter at wag_kareem

To learn how your support can help save a child’s life, visit http://WheelchairsAgainstGuns.org