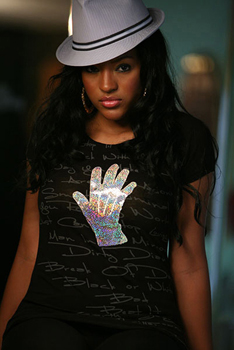 I first met actress Drew Sidora here in Chicago at the Bronzeville Film Festival last summer. As we spoke, I took notice of her articulate and poised way of speaking which was complimented by a vibrant personality that was all too genuine. So when I had the opportunity of interviewing her yet again, I gained even more insight into her story-where she came from and where she is going.

Born and raised in Chicago, it was in the stars for Drew to become as successful as she is, and unlike some people, her calling for a career within the arts became crystal clear as a child. “I knew that this was something that I wanted to do. I love music, I love entertaining people and making people laugh. And so it was just a matter of time before I could really pursue it professionally. I was doing school plays; I was in the choir and modeling doing print work. So anything that I could get my hands on, any opportunity, I pursued it, because I loved doing it,” Drew said with a hint of a smile in her voice. At the age of 10, Drew landed a role in the Fox sitcom ‘Divas,’ which really validated her acting bug bite and soon after, she began professing her feelings to her parents, who of course, stressed that education was the first priority. “They told me, “You do well in school; you can go to LA and try to make whatever it is that you want to do happen and if this is what you wanna do, set a goal and plan for yourself.” But like most parents, they wanted me to go to school and become a doctor, or you know, what most parents would want for their children,” she continued.
Amazingly, Drew made it her business to graduate high school early at the age of 16 in order to give herself enough time to get her feet wet, network and plan accordingly. While most teenagers were having fun talking on the phone with their crushes, hanging out with friends and getting ready for prom night, she was in the city of angels sleeping on friends’ and relatives’ air mattresses and taking the bus to stand in casting lines and participate at any event possible that she heard about through the Internet just to meet someone who would give her a lead-even if it was just some good sound advice. Those days to her will always be the very proof that she was hungry and her love of entertainment fueled her drive to make it. “When I look back on those days, I wonder how I even managed to be that strong. How did I do that? (Laughs) But in meeting other people, and talking to kids in school, I’ve learned that when you find something that you love and love what you do, you’ll fight for it, and you’ll strive for it. And that determination separates a lot of people from being successful, you know? They think that they wanna do it, but when they get into it, it’s ‘oh, it’s too hard, lemme find something else, lemme find something else.’ But you have to stick with it and when you stick with it, it pays off. Now it’s been eight years since I’ve been out here (LA) working,” Drew said.

Within those eight years, Drew has landed roles on various television and film projects such as ‘The Game,’ ‘That’s So Raven,’ ‘Step Up’ and ‘Never Die Alone’ just to name a few. But aside from making her mark in front of the camera, her experience has led her to grow professionally by adding ‘executive producer’ to her repertoire. With the film ‘Blessed and Cursed,’ more doors will now be opened. “I star in it and it’s my first project that I’m more behind the scenes on and I am the co-producer, which I’m very excited about. The film stars Dietrick Haddon, a great gospel artist, Karen Clark Sheard, another gospel icon, and it is a smaller film geared towards the gospel arena but I think it’s gonna be a wide demographic of people who will enjoy it. I’m looking forward to doing more of that in the future so that I can open a lot of avenues for talent. I got a chance to really learn a lot and I have to give a shout out to Dietrick. He allowed me the opportunity to get behind the scenes. So it’s definitely a blessing. It will be out June this year,” said Drew. It was inevitable that she strategized and looked for other things to venture in. “Producing is something I’ve always wanted to do. On sets, I am always talking to directors, picking their brains. In this industry, nothing is promised. One day you can be on top, next day, you’re off. The fact is there’s not a lot of work for African Americans and we have to create for ourselves. I mean, with ‘The Game’ being cancelled, we just don’t have a lot of phenomenal shows like ‘The Cosby Show,’ ‘A Different World’ or ‘Hanging With Mr. Cooper’. So I said at the end of the day, let me set my future and in the process, open doors for a lot of talent as well. I can be a part of making one project or two projects now, I can do something on a small scale and 10 years from now, I can do something on a larger scale. Now I can walk in the room and show that I do have the experience,” she continued.

There are even more things on the horizon. She recently started her own foundation called ‘Dream Makers’ that has the premise of helping inner city youth reach their goals by providing resources, money and support. “I meet so many youth who ask me questions about different things like ‘How do I get a headshot?’ or ‘What is a headshot?’ So we provide an educational platform for our young women and men on how to present themselves,” said Drew. Having just completed a teen women’s conference in Virginia, the foundation encourages self esteem, conducts HIV/AIDS testing, career workshops and wardrobe and makeup styling. With this platform, Drew reaches youth before they even get out to the casting rooms or job interviews by teaching how to conduct themselves as classy young men and women who walk into the door looking and feeling successful. “We tell them that instead of trying to fit in everyone else’s box of ‘oh you’re too dark, too short, too urban, not urban enough or too whatever it is,’ figure out your own assets and gifts. We plan on doing different cities along side my music promo tour this summer,” she said.