Growing up in the boogie down Bronx in a single parent household is not an easy childhood. It’s just one of the obstacles that the up and coming rapper D-Bless Aka Demetrius Lathon had to go through growing up, taking care of his mother and his two younger brothers. With this responsibility D-Bless went to high school knowing that knowledge and education was the only answer to get out of that situation and give his family a better life. Coming from nothing, his life story is inspirational and shows that dreams can be achieved if you put your mind and heart into it.

With his debut album, The Revival, dropping in mid-march, this promising up and coming rapper plans to not only flood the airwaves and stores with his music, but also the internet. He hopes to make an impression on the music industry while reviving Hip-Hop to its former glory.

We got the opportunity to interview the rising star for an in depth conversation about his career, ambitions, and the new energy he’s bringing back to a dying genre that has shaped our lives for decades.

Parlé: Why do they call you D-Bless?
D-Bless: Well, when I first started I was like 14, it was a dude named, Joz Imperial. He was a rapper and a lot older than me. “D” is the first letter of my first name and he heard me rap and he said, ‘this dude is going to bless the people with this talent and his gift; I’m going to call you D
Bless’. We took it and ran with it.

Parlé: I was reading a little about your background and how you were reared in the Bronx by your mother. Would you say that your mother is the driving force behind your career now?
D-Bless: Absolutely. Coming up you she was a single parent. She made sure I didn’t want for anything. She did what she had to do; no matter how hard it was. Basically, when I’m doing what
I’m doing, I’m always thinking about her, making her life better, making things easier and taking care of her. Even though she doesn’t need it, I just wanted to show my appreciation. She is definitely the driving force in my journey.

Parlé: That is beautiful. How did you get your start in the industry?
D-Bless: Well I actually started when I was a freshman in high school. I was in 3 different schools and whatever school I was in there was always freestyles. I stepped in and started battling this and that dude and everybody started saying “oh you nice” and I started getting respect. From there on that’s what I knew I wanted to do.

Parlé: How long have you been writing rhymes and songs?
D-Bless: I’ve been writing since I was like 14 and as far as recording songs I stared like at 16 to record songs and decided to put a product together and it was real promising.

Parlé: Who has inspired you in the music industry, like who do you look up to?
D-Bless: Cats like Jay-Z, 50 Cent umm Fabulous—especially Jay-Z and 50 Cent, they came from nothing and they built an empire, came from the bottom and made it all the way to the top and that is the direction I’m going. I’m not just gonna do music, I’m doing movies and all of that good stuff and fragrances and all of that.

Parlé: Cool, how have you grown both as a lyricist and as a person throughout the years?
D-Bless: I’ve grown wise you know, I seen a lot of things, all of that stuff made me more smarter, wiser and it reflects in my music so you can really see and listen in some of my older joints as oppose to the new joints there is a huge, HUGE growth that you can see you know. I take it so serious and it’s a lot of passion, you can just tell by listening.

Parlé: The name of your project is Revival, why that name?
D-Bless: Basically a lot of people are saying that Hip-Hop is wack, it’s this and it’s that. So, I’m bringing a breath of fresh air. I’m bringing life back into the game. I’m bringing energy. I’m trying to bring it back from the dead.

Parlé: Is the project completed yet?
D-Bless: No it’s actually in the works. I just completed my mixtape called Rejuvenation. It‘sgoing to be a series, Rejuvenation Volume I, hosted by Dj Self, but the album is still in the works. I got a lot of big name producers on there. I’m taking my time making sure its perfect.

Parlé: Do you have any upcoming videos?
D Bless: I got so many big records, I’m trying to figure out which one I’m going to go with right now. I’m thinking, I might have two singles out, but everybody loves all of the records. I just got to pick out the right one and the videos will be coming real soon.

Parlé: As I was reading your bio, I understand you want to bring rejuvenation back to this music genre. But to ask a more futuristic question, how do you plan to sustain in this industry? I believe you said you would like to do this for the rest of your life. But do you have other plans just in case?
D-Bless: Music is going to be my entry in the game. I love music, I’m going to always be around music. I’m not focusing on being an artist for the rest of life, but its more once I establish myself as an artist, my lifetime goal is become a mogul. So basically, I start with the music and branch off into other aspects, into different businesses—fashion, music, movies, fragrances, drinks all type of things. Then also helping other people get in the position where they normally could not.

Parlé: So you going to bring other artist under you like other moguls, correct?
D-Bless: Exactly, straight mogul status. 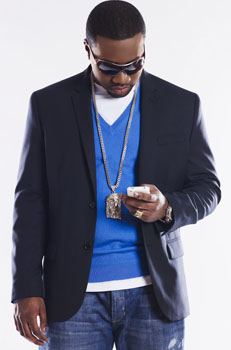 Parlé: Another futuristic question. After all of the success, what do you really want people to know about you? Who is D Bless really?
D-Bless: D-Bless is a 22 year old artist haling from the Bronx, with a bunch of energy with the passion for the music and just trying to put my city back on the map. The rap game started in the Bronx, I feel obligated to be the Bronx hero. The Bronx needs me right now. They need somebody out there screaming out the Bronx wherever they go. Right now, we don’t have anybody, it’s about that time somebody steps up and I feel like I’m the perfect candidate.

Parlé: How would you encourage somebody else seeking the same career path, what would you tell them?
D-Bless: Don’t let nobody steer you in the wrong direction. There are going to be a lot of people that don’t want to see you do better than them. Stay positive. Don’t let anybody tell you nothing. If you feel it, you believe it, and you have passion for it, go for it. Keep people around you that have faith in your dreams.

Parlé: Is there anything close to your heart? Are there any non-profits you support? How do you plan to give back after the success comes?
D-Bless: Basically, its going to be a whole bunch of different charities I’ll be working with.
Helping to reconstruct neighborhoods and get programs for kids, keeping kids out of trouble. I actually have a studio in Manhattan, with top quality equipment. People with my same equipment are charging $100-$200hr, I’m charging people only $50 dollars to have that same quality without breaking there pockets.

Parlé: Just for our audience to know, what does D Bless do for leisure?
D-Bless: (Laughs) Man, I’m always working! I’m always trying to come out with the next hit. I’m in the studio, if I’m not writing or recording, I’m listening to the music. I might play a little X-box or play some basketball or something. I’m taking on challengers for NBA 2k10. (X-box game)

Just like that we got a Word from a legend in the making. Success driven and goal oriented, D
Bless will be the one to pattern yourself after in 2010 and beyond. Watch out world, a new leader is born into Hip-Hop and he’s coming with the message, We’re not DEAD!