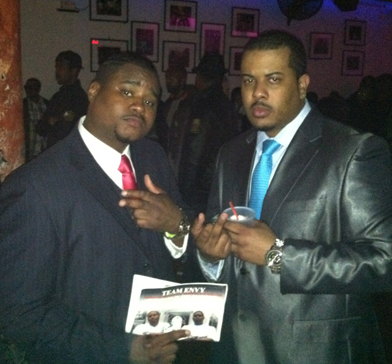 E.P.I.C. is defined by a wise young brother as Entertainment Presented in Class. I must admit I had to borrow that one to help this narrative. For me, there is something about Hip-Hop that makes me crave authenticity. Do not get me wrong, I listen to the occasional banter about unrealistic pitches, and enjoy a good slogan. What I am wholeheartedly is a passionist. MY Hip-Hop is about a story, my Hip-Hop is about entertainment, by all means, presented with class.

I introduce to you two brothers from Harlem; home to some of the flashiest, most notable personalities that the game has ever seen.  Upon first glance, their presentation will captivate you; the music will undoubtedly substantiate.  Creatively conscious, these two brothers can and will be, a breath of fresh air. Take notice, and Parlé with me as I present to you, Motion Picture Maverik and Rollin Stone Fame; Harlem’s Own, Team Envy

Parlé: For the record, how did you guys meet?

Motion Picture Maverik:  We actually met in high school; I remember Rollin Stone being a new student, and he would always ask me “who raps?” so I told him I did. A few days later, there were battles in the school featuring everyone who were known to spit.  When it was all said and done the best dudes from the battle came together, and formed “WISE GUYS”. That was our first group, and thats how me and fame met each other.

Parlé:  What was it about the other creatively that prompted you to form a collective on the music front?

Rollin Stone Fame: Well being that we shared the same passion for creating music, as well as the same drive and appreciation for seeing a finished product through to the end it was pretty easy.  It was clear that the two of us had developed the musical chemistry we have, after working together.

Parlé:  Duo wise, who are some of your influences creatively in Hip-Hop?

Maverik: Definitely Eric B N’ Rakim. Also legends like EPMD, and the tandem of  Jadakiss and Styles P when they go back-to-back.  We have been influenced by all those and today I can say that we have become an inspiration to each other.  I can always listen to old tracks and get goosebumps from it.   At the end of the day it helps us stay sharp.

Parlé:  Your names are interesting, what made you chose your monikers?

Fame:  I felt like Fame was a good fit because it was what I wanted to attain, just like every other kid. Comin up it was perfect, and as I got older I felt that my name had to be more of a statement; thats where ROLLIN STONE comes in. The addition reminds me of my goal to be large. The kind of fame I have in mind will get us the cover of Rollingstone baby!

Maverik:  I was watching a movie one day, and right before the credits rolled there was an introduction letting you know the following is gonna be official. In the intro, you see the globe with the universal sign spinning around it; or you see the trademarks like the Lionsgate usage of a roaring lion.  It made me think to myself  that the feeling that I felt, I want everyone to feel that when they get a load of me. For me its all about making movies you know, all eyes on me.

Parlé:  Your music has substance, how do you go about your content selection?

Maverik:  We’re very honest in the way that we express ourselves, but we also take our fans needs seriously. For us its all about the fans! We know they need potent lyrics, they need swagg, flow; They look for us to keep it real with them. So thats what we do when we give them a “MOTION PICTURE.”

Parlé:  I understand that you have some ghost writing credits as well, care to talk about that?

Fame:  Nah we don’t need to get into that, but I will say this, the world should know that there is indeed a subculture that exists amongst you all that provides some of your favorite artist what they need to survive in the music industry. And to answer your question, or elaborate a little, yes TeamEnvy does belong to the elite hidden group.

Parlé:  To date, what would you say has been the most satisfying accolade you have received?

Maverik:  For me the most satisfaction comes from the support we get from our fan base, and our people. Hitting that stage is the best feeling. When we perform, and I see our fans screaming out lyrics as we rap, its amazing and it makes me feel like we are really accomplishing something and living our dream.  We’ve been blessed to have people come to our shows holding up posters, and wearing pins, all to support us. Thats BIG in my eyes.

Parlé:  Your stage show is phenomenal, you guys are especially known for your appearance; is that a conscience decision?

Fame: First and foremost, thanks. BUT yeah we definitely take pride in our stage show like you wouldn’t believe.  I might go so far as to say we are probably one of the first to consistently do it the way we do. In today’s Hip-Hop scene, it’s rare that you see two rappers comfortable enough with themselves to smash a stage with a 3-piece suit on. So yes conscience decision it is, and we like to go for the shock factor and have the audience like “wow these dudes are sharp, their bars are tough and they can perform.”  We  bring the Garden to any venue that we step foot in.

Parlé:  Your latest offering Red Carpet, which was released on Valentines Day, so far how has the feedback been?

Maverik:  The feedback from Red Carpet has been exciting. By far the ladies love that we can show them what a grown man is like.  Also, the fellas like the fact that they can let the CD play, and not have to skip a song. We do our part to represent for them the right way.

Parlé:  Where can the people get the project?

Team Envy: Currently you can find some of our videos on:
www.youtube.com/realteamenvytv
www.hotnewhiphop.com/teamenvy

Kareem Green – No Stranger To Comedy

Jay Mel – A Blind Date with the Ohio Rapper

Keshia Knight Pulliam is Pregnant and Expecting Their First Child as...