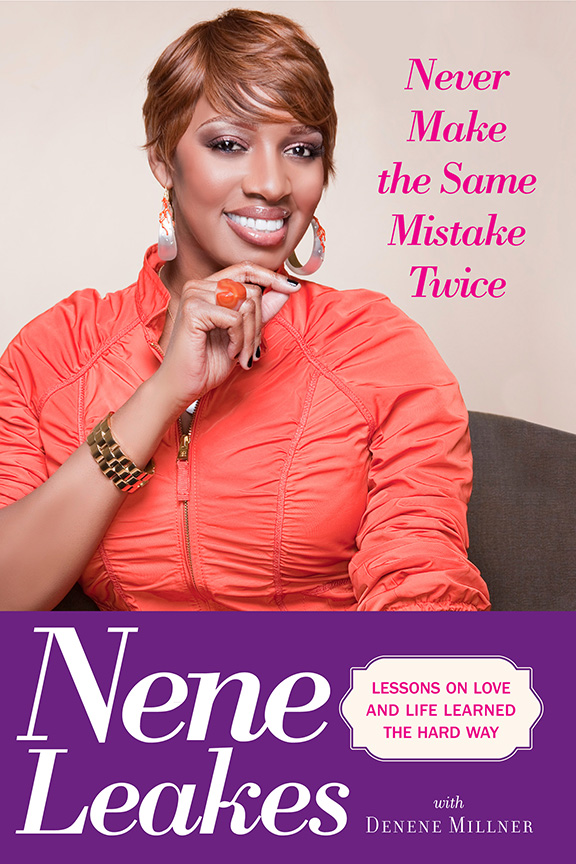 What comes to mind when you hear the name NeNe Leakes? How about vivacious, entertaining, and successful. She’s known for telling it like it is, and she’s doing just that on the spicy reality show, Real Housewives of Atlanta. But if you thought Leakes stopped there, think again because she’s dishing out even juicier news in her newly released memoir titled, NeNe Leakes: Never Make the Same Mistake Twice.

“This was written in my voice. It’s an easy read, something you can sit down with your girlfriends and talk about. It’s juicy and I’m telling it like it is.”

Of course if you’re a fan of the show, or have watched only one episode, you know these housewives bring drama wherever they go and for some reason, NeNe is always at the center of it. I went into this interview with no expectations other than to find out firsthand if Ms. NeNe Leakes does in fact…tell it like it is.

She’s made mistakes and she’s not afraid to let the world know. In her new memoir, Never Make the Same Mistake Twice, the reality star dishes on her past life experiences and lays to rest a few pesky rumors that started once she became an Atlanta Housewife.

Everyone makes a few mistakes in their lifetime, the biggest one NeNe has made and would never want to repeat is being a single mother, saying, “I would never be a single mom again.” Leakes commends single mothers today because she personally knows how tough it can be to raise a child on your own, saying, “I took care of my child by any means necessary. I did what I had to do.”
And rumors of what exactly she had to do have been spreading in the gossip world since season one of the reality show; but after months of speculation and lies about a past career choice, Leakes finally decided to bring the rumors to rest and confirm that she was indeed a stripper before she was married. Although she’s told reporters she strips for her husband Greg everyday, she never confirmed her job as an exotic dancer until now.

Her stripper name was “Silk,” and now that the cats out of the bag, NeNe isn’t afraid to talk about it, saying, “I wanted to save the juice for my book. I’m not ashamed of anything that’s happened in my life. People expect for me to tell it like it is, and I did so in my memoir. People will judge me regardless. If I weren’t on television then they wouldn’t talk about it.  I’m a clear example of success. I’m signing contracts everyday. I‘m still a stripper. I strip for my husband.”

NeNe isn’t the only housewife that’s rumored to have been a stripper; gossip blogs have also said that single mother, Kim Zolciak used to ‘take it off’ back in the day, but don’t depend on Leakes to come to Kim’s defense because apparently, the two aren’t even friends, “we were associates not friends. I have two close friends, I wouldn’t talk to Kim about anything personal. We will always have our differences.”

NeNe’s tell it like it is attitude has been in effect lately when it comes to Zolciak. She’s not afraid to speak her mind, having told Kim to ‘keep her legs closed to married men,’ and calling her a ‘hooker.’
Starring in a successful reality show has opened up many doors for NeNe, and she is taking full advantage of every opportunity. Soon fans will have the chance to see how it feels to walk a day in NeNe’s shoes, with the creation of her new shoe line, “my line is called Strut. Right now I am checking to make sure no one owns the right to the name. They will be specialty shoes for those who wear a size 9-13, will range between $80-200, and will hopefully be sold on a home shopping network.” NeNe loves all her fans and will not discriminate on her customers, “my shoes are for women or gay men who wear high heels.”

One thing you may not know about Leakes is that she is an actress, in fact, she already has her SAG voucher and has been featured in a blockbuster film, “I had a part in the movie Fighting Temptations. I would love to star in the next Sex in the City film and work with those girls. I’m open to working with everybody.”

Although the Real Housewives of Atlanta is one of the most popular reality shows on television, not everyone is a fan, but NeNe has a message to all the haters, “I can’t represent for all black women. I can only represent for myself. I don’t have any pressure to represent for anyone but NeNe Leakes.”
NeNe is still filming the second season of the reality hit, and if you’ve seen the first few episodes already, you know she is bringing pure entertainment to your TV screens, “we say what we feel. This isn’t a scripted show, it’s life, and it makes great TV.”

A popular reality show, a memoir, shoe line, and taking Hollywood by storm, what else can we possibly expect from the one and only NeNe Leakes, “I’m in talks to write another book. This next one will be a guide to women. I will tell how to drive the Bentley and not let the Bentley drive you.”
So, does NeNe Leakes tell it like it is?

Most definitely. She’s a strong woman that says what’s on her mind and is not worried about what people think while doing so, “I don’t have to boast or brag, but I’m rolling in the groups you want to roll with.”
Keep in touch with NeNe Leakes via http://www.Twitter.com/NeNeLeakes and  http://www.Facebook.com/NeNeLeakes