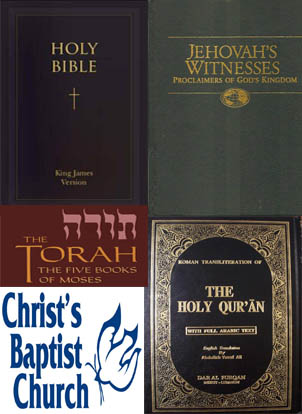 There has long been division within the Black community, but nothing compares to the rift that religion can cause. Muslim, Christian, Jehovah’s Witness, Methodist, Baptist, Pentecostal, Judaist and many others. These are not just religions, they are methods of separation. When people seek a higher power, there are a plethora of choices but how do we choose and what influences that choice?

Within the Black community, it is that choice of religion that will determine how we are viewed by our fellow brothers and sisters. Religion has become the new categorization that dictates how we treat the people within our community and sometimes our own family members. It is one of the touchier subjects that we tend to be unable to speak openly about to each other. People fear saying the wrong thing, so tend to shy away, leaving the dialogue closed and untouched. The few who do attempt to spark a conversation, typically were raised with a strong parental influence in regards to their beliefs. What most of us fail to realize is that religion has been created as a very functional way to disconnect Black people from each other.  For instance, Christians may not mingle with Black Muslims, nor be able to easily relate to the beliefs of a Jehovah’s Witness.

However, if the true theory of your religion is to love one another and always do unto others as you would have them do unto you, then are we being hypocritical?  The Nation of Islam has supported the black community in so many ways that at times it is perplexing that people are capable of degrading that faith although a lot of people believe that they can do more for the community than most other religions have done or will ever do.

I can only assume that like most problems, everyone wants to be right so people are apt to tell the next religion that their beliefs are wrong. This has become a lot like the old Jim Crow in the South.“If you don’t believe what I believe, then you cannot come into my facility.” “I will not ride on your bus.” I will segregate myself from you and your followers. It has even caused such a disastrous problem that many pastors have given up on conversation with other pastors and when the community is in the worst despair these same denominations have refused to  come together to help fix neighborhoods that are dying.

On every other corner in the Black community there is a different denominational church ready to serve its congregation.  In my opinion, the cost is too steep when most of these churches teach how they are better than the next church down the street, because they have the truth.  The truth is that when you instill division in your congregation that only tears the community apart. The great divide of religion has pitted father against son, mother against daughter; this thing called religion has torn our community apart.

When a church opens its doors to the very absent politician just to gain recognition, but will not open its doors to talk to a pastor of a different denomination, there is something wrong. When will we as a people take our blinders off and realize that as long as we stand apart we will never completely move forward as one? It amazes me to see churches in the Black community remain disjointed.  If the church will not compromise, how do we expect the people work together?  Religion has been dividing the Black people for as long as we can remember and there doesn’t seem to be any solution in sight.

Also Check Out:
Shades of Grey: “N” Word Use In Social Media
Interracial Dating: Is it about Love or Laziness?
Is it Cheating…if She’s OK with it?
“But You Don’t Look Sick” – The Invisible Illness Reaction
Essence Festival To Close With Khan