Skip to content
Home » Self Made 2 – Maybach Music album review 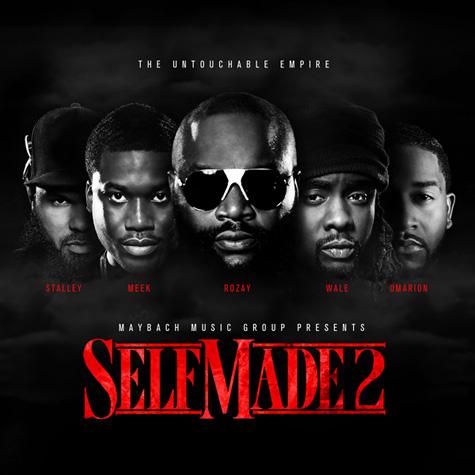 At the recent Maybach Music press conference, Diddy said to a room full of media that every time he hears the Australian girl say the words “Maybach Music” on a track that his “dick get hard.” Unfortunately for Maybach and their latest release Self Made 2, it takes a lot more to excite me.

The album starts out with one of the album’s highlights, “Power Circle” featuring the entire Maybach Rap family, even the seldom talked about Gunplay, who holds his own with Wale and Meek. Kendrick Lamar is also on the track, slightly out of place, but he rounds out a great start to the project.  Right from the beginning you can tell that as a unit they have found a better sense of camaraderie this time around, especially among the core three members. While they were able to make it work on songs like “Play Your Part” and “Pandemonium” on the original Self Made project, this time around it all sounds much more fluid.

Another pleasant surprise is the addition of Omarion. Let’s face it, people didn’t expect much from him on this team, but he’s featured on two of Self Made 2‘s more stellar records, “This Thing of Ours” and “M.I.A.” And he even gets a solo track with “Let’s Talk,” an opportunity Teedra Moses wasn’t afforded on the former album.

Ross and Wale overload the album in my opinion. They each appear on 9 of the 14 tracks, and they share the 15th bonus track. However, Stalley and Meek Mill, the more hungry of the quartet of rappers only appear on 4 tracks a piece. I won’t enter into the debates flooding the internet over who’s underrated or overrated here, just saying I would’ve liked to hear more from underdogs.

Self Made 2 has made improvements since the original, but not enough progress. You’ll have a handful of hits to add to your summer collection, but we hope this is merely a place holder until Ross’ God Forgives, I Don’t album drops.

Self Made 2 gets a PAR