Skip to content
Home » The American Justice System – Who Does It Serve? 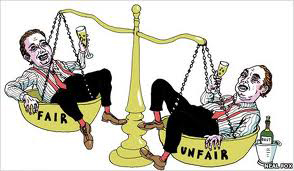 The American justice system is one of the largest moneymakers in this country. It has become that way at the expense of the poor and the Blacks in this country. This has been going on since President Lincoln signed the Emancipation Proclamation. Once the slaves were free and could start making a life for their families. Laws started being changed to keep them at a lesser level than their white counterparts. Vagrancy laws were introduced, for example if you’re caught standing on the streets you were arrested. These kinds of laws were a tool to keep the free ‘slave’ in constant fear.

Fast forward to today and we see the same exact thing going on with the laws of today. The system has been set up in a way that it keeps certain parts of the American population as criminals. That part of the population are the Black and financially impoverished.  The poorer people in this nation do not stand a chance against the justice system. Moreover, this is evident in the disproportionate number of wealthy and poor who end up in the system. The poor and Black abundantly outnumber the rich in this situation. The war on drugs has been one of the worst initiatives to date. This has been for too long now one of the fastest and easiest ways to keep people in the system. And most of this is from marijuana charges but the authorities will not legalize marijuana because it is one of the number one charges we see in courts today.

Think about it, when a person is arrested for a felony and some misdemeanors in this country their life is essentially over. They are forced to live the rest of their lives as if they have the scarlet letter branded on their foreheads. They are reduced to second-class citizen status, they can’t vote, gain employment or go to college. This in turn pushes the individual back to the criminal mentality. And it seems as if that is just what the justice wants, all the while trying to mask this by coming up with new law after new law. Most of the American citizens have no clue of all the laws that this country has put in place. There are no classes taught in schools informing the citizens of the laws.

Most offenders got their record while they were teenagers, so by the time they are adults they have been part of the system their entire life. Prisons are being built at a very fast rate and no one is taking notice. These prisons are being promised a certain quota of inmates and they are being filled. These prisons are also starting to be traded on the stock market, which should also raise concerns. This should also let the public know that there is big money being made and that money is the only issue. When this is the practice of our justice system, it just reinforces that America wants a certain part of its society to remain criminals.

There are very cost efficient ways to change the behavior of the citizens in this country. If we would build trade schools in these impoverished areas this would give the members of these communities hope and a way to earn a living. What’s better than teaching the people a trade that they could pass down to their kids and get them off the streets? The sad fact is that most of the nonviolent criminals are treated just like the vilest criminals in the system. So that when they try and re-enter society they are blocked at every turn. The American justice system has taken the Black and poor community to a level of unmatched despair. It is now up to the people of this country to stand up and demand changes in this broken system.

Also Check Out:
America’s Welfare System: The Gift & The Curse
The Art of Being A Successful Thrift Shopper
“The Soul Man”: Bringing The “Wholesome” Back Into Your Home
Tracey D. Syphax – 5 Tips on Successful Reentry
Frank C. Matthews – Putting True Fiction On The Radar