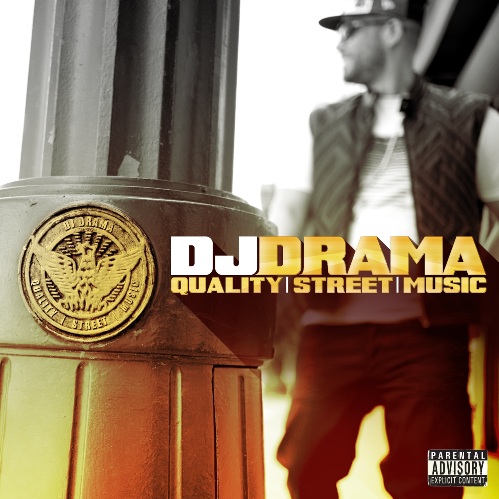 If nothing else, DJ Drama is consistent! In the last couple months he put the finishing touches on Lil’ Wayne’s Dedication 4 mixtape and the Slaughterhouse, On The House mixtape. Still he found time to promote and release his own fifteen track project, Quality Street Music, packed full of his genuine quality and impressive collaborations. His third major release, features some of his most impressive work, a great sign for the DJ album scene.

DJ Khaled and Drama have been side by side releasing mainstream albums for the last few years. While both feature great overall content, Drama has been able to take the slight edge because he goes far and wide to find the best acts and artists he hasn’t worked with previously for his singles. Unfortunately the roster featured on the first Khaled album are pretty much the same guys on the latest project; and the singles have pretty much sounded almost identical. With Quality Street Music Drama features Common, Meek Mill, Tyler The Creator, Cee-Lo, Yo Gotti, Nipsey Hussle, ScHoolBoy Q, Jeremih, Curren$y, Miguel and Tyga, just some of the people who haven’t appeared on a Drama album before.  The complete roster is a Hip-Hop and R & B Who’s Who.

Drama takes the album title seriously, Quality Street Music isn’t just a clever name, it’s a goal. When you gather some of the best artists in the field to deliver on that goal, then you’re on the right path.  The beats and production on the album only increase the album’s overall outlook.

Personally I felt Tyler, Waka, and Travis Porter take the album down a notch, only because they provided back-to-back low points on the album. Adversely, one of the highlights is the Kevin Hart “Chocolate Droppa Skit”. Hart spits a decent set of bars in what’s supposed to be a Drama diss, and its hilarious!

Drama gets points from me on this one. Hopefully he finds some success in the sales department because we need a DJ on the scene highlighting those artists that aren’t always mentioned on the top lists, especially if it results in Quality Street Music.