Like Williams, Stephens comes from a gene pool full of athletes. Her mother was an All-American swimmer at Boston University and her father a First Round Draft pick of the New England Patriots in the late 80’s. However, her parents aren’t a presence over their game like the ever-polarizing Richard Williams. Her three Junior Grand Slams gives Stephens some legitimacy in tennis circles. But before the Quarterfinals match with Serena (her first Quarterfinals appearance in an Grand Slam) she was relatively unknown nationally.

At the age of 19, Stephens is a precocious teenager possessing all the superlatives one would want as a representative for their sport. 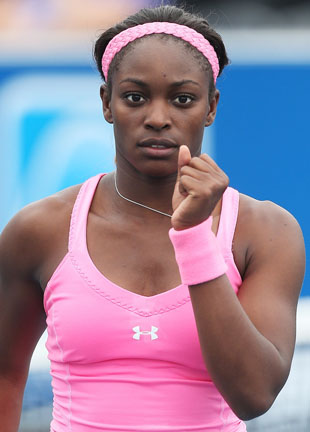 Perseverance. She came into the match the David to Serena’s Goliath and when faced with adversity, she answered the call. Down 4-4 in the third set, Stephens rallied against a hobbled Serena to take the set and subsequently the match.

Grace. When Serena slapped the final volley into the net sealing the victory for Stephens, Stephens wide eyes stared into the camera in silent hyperventilation. She seemed mortified by her own success.

The juxtaposition of the two women is telling.

Sloane Stephens possessed a more “aw shucks” demeanor after her loss to Victoria Azarenka. She oozed humility. During the Azarenka match, where Azarenka was given extra time for alleged “injuries,” Stephens never complained, she remained calm and even though she fell short, she came off appearing far more classy than adversary. Tennis analyst Patrick McEnroe called the move “bush league”; Stephens never uttered a word about the legitimacy of the Azarenka tactic.
During her time of distress during the Aussie Open, Serena cursed and smashed her racket in frustration. Serena implicitly blamed the loss on injuries. Her posture and sharp comebacks came off as defensive and bitter. When a reporter asked if she thought about retirement (not realizing at the time he meant retiring from the match), Serena snapped at him.

The regal nature of tennis makes Serena an easy target for the pariah label. Her diva personality and abrasive attitude makes her difficult to embrace and an easy target for a slighted media. Serena is the epitome of an individual. Whether she’s representing the USA in London by celebrating with a crip walk or engaging in profanity-laced arguments with the line judge, Williams’ provocative antics often detract from her immense talent.

Serena doesn’t seem all that concerned with the consensus media opinion. But we, as fans and media, need our athletes to care. Williams committed the ultimate act of sacrilege in sports: She admitted that while she shed the blood and dripped in sweat, she didn’t eat, sleep and breathe tennis. Tennis almost seemed as though it was nothing more than an intramural activity for Williams. Many took it as a slap in the face to Serena’s predecessors that she will inevitably be compared with once her career ends.

Serena? Well she was just being honest.

Like Rory and Tiger the media will embrace Stephens with open arms, in hopes that the young gun will give the old guard a run for her money. This time we know whom they’ll support.