Skip to content
Home » NFL vs. NBA – Image Is Everything, Offseason Blues 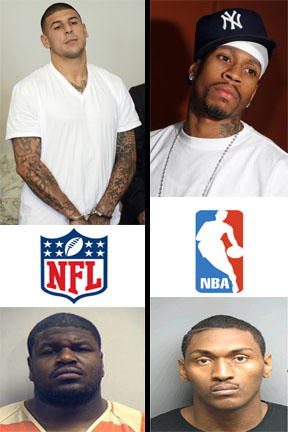 186 days. That’s the length between the Super Bowl and the first NFL preseason game. There’s no one more excited to see the media attention turn away from the NFL player conduct than Roger Goodell. Since the end of Super Bowl 47, more than 40 arrests involved NFL employees. More than 8 per month, almost two per week since the Super Bowl. An ugly offseason was capped off by an Aaron Hernandez murder indictment.

Goodell has a problem. Goodell took over as commissioner determined to curb the arrests in his league, but 5 years into his term, it seems as though his policies have done little to stop the arrests. From 2000 – 2006, under Paul Tagliabue, an average of 17.7 players were arrested annually. Since Goodell instituted his harsh policies, that number has increased to 28.5 arrests per offseason. But when football kicks off in September, I’m almost certain that these legal troubles aren’t going to hurt the NFL’s popularity.

America’s favorite sport has a player-safety problem, a drug and steroid issue, and its employees have a tenuous relationship with law enforcement. But somehow the NFL doesn’t seem to have an image issue.

How is this possible? I thought to myself if the NBA had as many arrests and players in legal trouble the league would suffer from a serious, possibly life-threatening image problem. So I asked myself a few questions:
Why don’t we turn our back on this violent barbaric sport? Why is it that we ignore the lawless and reckless attitudes of its players (and employees) and refuse to hold it against them by withholding our support? Why is it that the public hasn’t shunned in the same manner as we did in the pre-Stern NBA era where the league’s drug and crime issues were very much a part of post-civil rights zeitgeist? Why aren’t the troubles of Aaron Hernandez, Adam “Pacman” Jones, Ben Roethlisberger, Michael Vick, Plaxico Burress and the several others who have been arrested turning us off from the NFL?

My answer was born out of the reluctant witness in the opening scene of The Wire: “Got to, it’s America(n) man.”
When I think of the most patriotic sports images of my lifetime I think of 1) George W. Bush throwing out the first pitch of Game 3 of the 2001 World Series 2) Whitney Houston’s rendition of the national anthem during Super Bowl XXV and 3) Dallas Cowboys’ safety George Teague running onto the field with a giant American flag in the first game at Texas Stadium after the attacks of September 11th. Out of the four major sports in this country, there’s only one that has successful combined off-the-field patriotic branding with an impeccable on-field entertainment and it’s the NFL.

On the flip side the NBA hasn’t done as good a job as its counterpart of tapping into the patriotism that the NFL and the MLB. After the Jordan-era the NBA decided it was going to market the Association as the rebel league. Rebellion and Patriotism don’t mix. They embraced Allen Iverson, marketed the league to an urban demographic and embraced Hip-Hop like no other league. The problem? The average NBA consumer/season ticket-holder is a 40-year old white male. Not exactly the target demographic of the Hip-Hop world. The backlash against NBA was strong and piqued with the 2004 “Malice at the Palace” brawl. The marketing of the NBA as a rebel league soon backfired on the NBA; the rebellion wasn’t cool, it didn’t appeal to the sensibilities of corporate America and it hurt the league. The anti-NBA sentiment was so strong people were rooting against the 2004 Olympic basketball team, because many felt that team representation of all that was wrong with the league.

If the NFL had a national team in the Olympics, can you imagine that happening? I doubt it.

Basketball by nature is a far more individualistic sport than football. Basketball is a less rigid flashy sport. Basketball is Jazz and Rock n Roll, football is a symphony orchestra. Much like Jazz and Rock, it’ll take some time before corporate America catches onto the status quo of tattooed, ornately, garishly dressed fashion-forward basketball players. But not yet, the NBA continues to walk on public relations egg shells; always dangling precariously between attractive and provocative because of its magnetic irreverent personalities and repulsing because of its magnetic and irreverent players.

As long as images and memes like this exist, the NBA will never be sport of the “every man.”

The NFL is the ultimate blue-collar league. Through the structure of the game, marketing and careful attention to its audience, the NFL is the ultimate symbol of American hyper-masculinity. The NFL appeals to the reptilian section of the brain. The big hits, the primitive screams, the violence, the NFL players are our modern day gladiators. No professional sport resembles the marriage between the camaraderie of men (and sometimes women) and violence similar to the military like the NFL. And the NFL doesn’t back down from it either. You can’t get through an NFL game without several commercials and references to the marines, army, navy or the troops. It’s a beautiful and necessary nod to a game that takes so many of its principles from military practices.

America loves its troops. The NFL publicly (and genuinely) embraces the troops. Thus we love the NFL. Simple enough right?

Not even close. In the mean time let’s sweep this under the rug and start putting together our mock fantasy drafts.