Skip to content
Home » Be Fruitful, but Don’t Multiply! 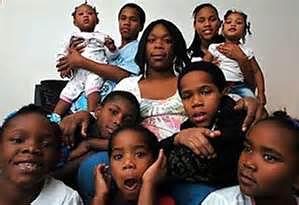 The Problem of Male Baby Makers

As young Rahim sits quietly on the stoop outside of his grandmother’s apartment building, he watches as cars on the road and people on the sidewalk pass in front of him. His adolescent mind wonders what exciting places they are headed towards. He questions himself: Why are they driving so fast? Why are they walking with such purpose?

His tender heart assumes they are all in a hurry to get to somewhere fun? Rahim’s innocent mind begins to run wild. He smiles at the thought of going to McDonalds to enjoy a Happy Meal, or shopping at Toy R’ Us, or going to a water park, a playground or any other place besides where he is now. As he continues to sit on a dirty stoop, still wet from the rain earlier that day, he longs to join the “hustle and bustle” of the rest of the world. However, today is another typical day in his young life. He’ll wait on the stoop for another half hour until the number 83 bus comes into view. At that point, he’ll jump up at the first sight of his twenty seven year-old mother arriving home from her job at the local mall. Until then and with each passing moment, Rahim wonders if life would have been different if he had the benefit of a father.

Unfortunately, Rahim is one of the nearly 24.7 million children living absent from their biological father (U.S. Census Bureau, 2011). Today, nearly 26% of absentee fathers live in a different state than their children. A staggering 50% of these children have never met their father. These unlucky kids have a greater likelihood to be poor, experience educational, health, emotional and psychological problems (Journal of Family Psychology). The lack of a male protector makes them vulnerable to child abuse, and they are more likely to join gangs and engage in criminal behavior v/s kids with both parents in their lives. This path often leads to a sad conclusion for misguided kids whose only real crime was being the “product” of a selfish and irresponsible man.

In my recent post titled True Manhood, I noted that manhood is “about setting out a course for your life and the ones who depend on you …” I also referenced the book of Proverbs, chapter 13 verse 22; where the text reads, “A good man leaves an inheritance to his children’s children, and the wealth of the sinner is stored up for the righteous.”

Real fathers find the time and space to connect with their children and enrich their lives. Fathers do not neglect the ones that are depending on them for love, guidance, leadership and nurture. The problem facing most abandoned kids is that some men have decided it’s okay to neglect their offspring or they never wanted them in the first place. In either case, young innocent lives are transformed forever by these selfish choices.

Male Baby Makers are men that enjoy the sexual component of intimacy with a female but do not stick around to deal with the outcomes of an adult choice. Therefore, the lack of personal liability taken by these men is a societal scourge with far reaching implications. “Male baby makers” create a legacy of dependency by procreating without assuming the paternal responsibility for it. Their offspring are regulated to suckle from the government “tit” due to a lack of the required resources to augment a happy and healthy childhood. Oftentimes these babies are left with mothers that are overwhelmed with the daily tasks of life in today’s world, and therefore ill equipped to manage competing needs on their own. In the end, the child suffers, the family is fractured and society is weakened because of it.

It’s a difficult proposition to convince a selfish man to take on the responsibility of fatherhood. The reasons they should do it are obvious but the spirit to do it must be present. The court system is an effective avenue to hold men accountable to their financial obligations. However, child support cannot supplement the emotional, mental and personal touch of a male’s influence on his child. Therefore, if a man does not have the desire or possess the will to be a father, he should consider a Vasectomy.

That’s right…I’m suggesting surgical male birth control. Unfortunately, condoms are not 100% effective thus leaving open the possibility of an unwanted pregnancy. However, with a vasectomy, a doctor closes or blocks the tubes that carry sperm. When the tubes are closed, sperm cannot leave a man’s body and cause pregnancy. The unreleased sperm is harmlessly absorbed by the body instead of being ejaculated.

This safe, cheap, convenient procedure lasts for a lifetime and it allows men to enjoy sex without worrying about fatherhood.

There are many myths about vasectomy such as it changes male hormones, alters masculinity, impacts erections or disfigures the male organ. All of these are false! Vasectomy will not affect your sex organs, sexuality, and sexual pleasure. Nothing will happen to the male glands or organs. Every man that has had a vasectomy produces full, satisfying ejaculations.

According to Planned Parenthood, a Vasectomy may be right for you if

It’s time for men to become responsible for their life choices. If a man is not interested in being a father, then take steps to prevent it from ever happening or from happening again in the future. No child deserves to be born into a dire situation of neglect and abandonment. I know my recommendation sounds severe but I would rather see a stadium full of sterile men than just one house full of abandoned children.

After a vasectomy, these male baby makers are simply sexual bed hoppers without the possibility of destroying young lives. Hopefully the women they lay with will wise up and leave them all together.

Quite frankly, some selfish men don’t deserve the pleasure of sex either but at least a vasectomy means that no offspring can be produced from their sexual recklessness.