“Tis The Season To Be Jolly” is the tune most famously sung around this time of the year. The Christmas season, a time of the year that many celebrate by exchanging gifts and spending time with family. This Christmas season however, legendary Gospel singer Marvin Sapp decided to share the gift of music with his fans by releasing his first Christmas album titled, Christmas Card. Over the past twenty years Marvin Sapp has done almost everything any artist can ever hope to accomplish. From his days with Commissioned to his illustrious solo career, Marvin Sapp has dominated the genre of Gospel music in a way that can’t be duplicated. After nine studio albums, being nominated and receiving a great deal of awards, Marvin still found a way to create something fresh and new for his listeners.

Christmas Card, which was released on October 22nd is the first album he executive produced. Drawing inspiration from his fans, friends and family, Marvin created an album that resembles the good ol’ days of Christmas anthems sung by Donny Hathaway and James Brown. Christmas Card is led by the single “Home For Christmas” which features Joe. The album also features what Marvin calls his favorite song “Dance (Christmas Step)” which is a more funky fresh tune people may not be used to. Marvin Sapp proves with his latest release that he is diverse and still remains as musically talented as he was since his beginnings. Balancing family, the church and business during this recording process Marvin proves

Once again that he has earned the title of living legend.

Christmas Card is the ninth studio album from the Gospel singer. As if the prior eight albums weren’t enough Marvin decided to give his fans something he had never given them before. This makes two firsts for Marvin, the first executive produced album as well as the first Christmas album he’d ever done. Why a Christmas album? Marvin Sapp is a specialist for creating new ideas and music so this album was his opportunity to do just that.

Executive producing Christmas Card was a first for Marvin but as he says jokingly “something I never want to do again.” Shaking the stigma of being a singer/songwriter he embraced the opportunity to show his production chops. “The most fulfilling part of being able to release this album was having the chance to show myself as a producer however this process is way harder than people think,” Marvin explained.

As for the single, “Home for Christmas” featuring Joe may seem surprising but for Marvin it was exactly
what the single needed. Commissioned, a group that Marvin has sung with since the 1990’s, which also features, Fred Hammond, Keith Staten, Mitchell Jones, Karl Reid, Michael Williams and Marcus Cole, resurfaced back on his new album as well with two songs, on “What Child Is This?” and “Honor The King.” When asked how it felt to collaborate with Commissioned this time around Marvin’s answer was simple, “Great.” 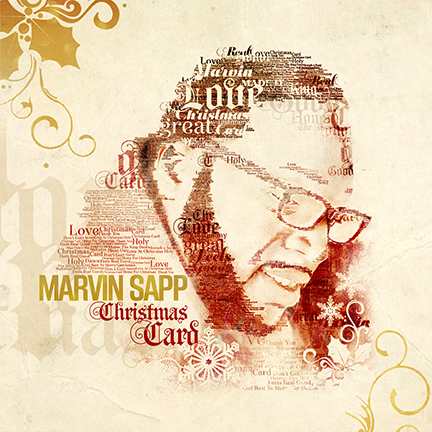 Christmas Card showcases Sapp’s love for being diverse as well as him embracing the opportunity to reinvent himself. Collectively from “Home for Christmas,” the title track, “Christmas Card” and “Thank You” featuring The Sapp Kids, this album creates a holiday ambience that hasn’t been felt in quite a while.

Since this is the season of giving Marvin expressed the type of gift he’d like in a perfect world, a “writing instrument” also known as a pen. Who would’ve known Marvin Sapp was an avid pen collector? Having a pen worth $17,000 transported from the Vatican, the Pope John Paul II “writing instrument” is one that he cherishes. For his children he’s unsure exactly what this holiday season will bring them, however he stresses Christmas is everyday for his children. This Christmas also marks the first year he doesn’t take his annual trip to Florida, nonetheless he’ll make sure Christmas is as joyful and memorable as it should
always be.

Consistency and quality is key for Marvin Sapp. Over the years he has accumulated an extreme amount of hit records, sold over two million singles and ringtones, toured across the world and last but not least built a beautiful family. Looking back on his career Marvin has remained on top of his game since the beginning and shows no signs of slowing up now. His musical ability is without a doubt something you can’t ignore. For twenty plus years Marvin Sapp has been a staple in not just Gospel but the entire music industry. What’s next? Marvin Sapp doesn’t have the clear answer yet, but he’s taking it one step at a time in hopes of living a life that the man above can approve. Christmas Card bred a few first for him, but it also continues to solidify Mr. Marvin Sapp as a living legend.

The Marvin Sapp Christmas Card album was released on October 22nd and is available at stores and online wherever albums are sold.