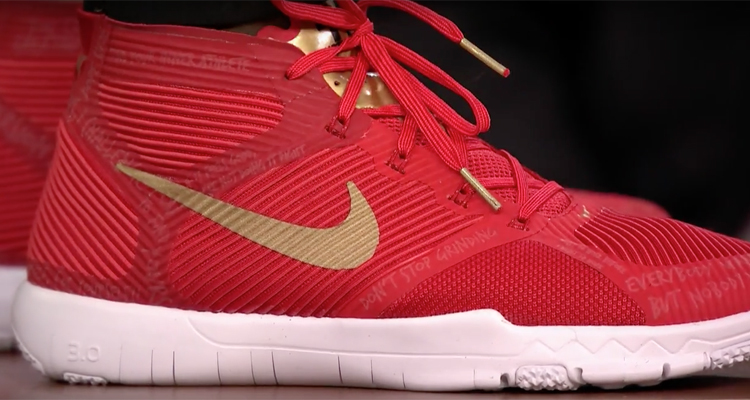 Kevin Hart is one of the most successful comedians of our time, finding success at the box office with big picture films, on stage with his stand-up and even in television with his BET show, Real Husbands of Hollywood.  His star power continues to grow.  After recently headlining the celebrity game at NBA All-Star weekend, Kevin is clearly the go-to comedian for the NBA. So it’s only right that Nike would give him a signature shoe.  The Nike Hustle Hart gives Kevin Hart a signature sneaker, making him the only non athlete with a shoe under the brand, and the first comedian.  While Kanye West began his career with the company, he has since moved to Addidas.

Released in April 2016, the midtop training sneaker features motivational and inspirational quotes that become clear when a light flashes on them. The sneaker comes in red, blue and black with a gold trim on the tongue and gold swoosh.  It also had a chukka cut.

Kevin Hart first introduced the Nike Hustle Hart sneaker on The Jimmy Fallon Show back in January, but with Nike helping to push his training regimen, it’s fair to say the sneaker is picking up steam.

I’m debuting my “Hustle Harts” in Toronto for “All Star Weekend” …..We are about to take Cross Training to another level this year people!!!!! Check out the writing that pops out with the “Flash Technology” #HustleHarts #AllStarWeekend #DopePic

Safe to say Nike made a great investment. With Kevin’s social media presence alone, the Nike Hustle Hart movement will be great for the brand.  Congrats to Kevin Hart, proving again that he is a social media genius. Make a life-changing move by joining Kevin in his movement. #MoveWithHart

Take A Look At The Newest Addition To The Air Jordan XXXI Collection, “Snakeskin”