Skip to content
Home » Introducing You To… Toronto, Canada

An Inside Look At Toronto, Canada

Toronto, Canada might bring to mind images of blizzards, igloos and parkas, but don’t be fooled: Toronto’s summers are hot and humid, and most of its citizens live in high rises or town houses. In fact, Toronto’s too warm to even build one igloo.

If Toronto’s not all about igloos and parkas, what is it about?

Toronto is the most multicultural city in the world. Different neighborhoods celebrate different cultures: China town, centred on Spadina and branching outward, Little India in the east end, clustered around Gerrard, and Greek Town, stretching along the Danforth from Pape to Broadview, are just a few neighbourhoods showcasing a specific culture.

If you have to pick one neighbourhood to get your taste of Toronto from, check out Kensington Market. Featuring many restaurants—including some of the city’s best vegetarian and even vegan options—and shops of all shapes and sizes, Kensington is full of character. Kensington’s also home to many art galleries and music bars. Many of its walls are covered with graffiti art—not to be confused with Graffiti’s, one of the area’s music bars—and its streets lined with buskers. Go on a Pedestrian Sunday to find the streets closed to cars and covered in artists and buskers. 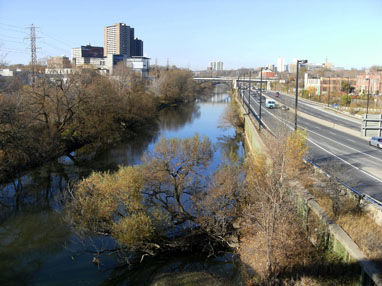 One thing that makes Toronto stand out from the rest is its sheer multitude of parks and trees. The Lakeshore bike trail travels through several of these parks all the way from the east end of the city to the west end. Taylor Creek, found a few blocks north of the Danforth, stretches from Victoria Park all the way to the bridge which separates the east end from downtown. And of course, there’s the Don Valley (pictured right), which separates the east end from downtown and features a long bike trail—although on a hot day the river smells awful.

While most people associate poutine with Quebec, Toronto’s slightly obsessed. Queen West features the city’s best: Poutini’s House of Poutine and Smoky’s Poutinerie. These restaurants will show you the surprising number of things you can do with the dish, and Smoky’s is a great place to stop on your way back from a night in the city’s clubs—most of which also reside on Queen West.

To complete the Toronto experience, there’s one important sight: the city’s skyline. Spearheaded by the CN tower surrounded by an ever growing number of high rises, at night Toronto’s skyline is a beautiful light show. You can catch a great view of it on your way back from the Toronto Islands or in one of several parks along the Lakeshore—for the best view, pick one of a dozen parks between Royal York and Kipling. At odd hours of the night or on special occasions, you might get to see the CN tower’s lights change colours—sometimes into a full-blown rainbow.

Toronto is a great place to visit, full of adventures. You’ll meet people from all over the world living together in this unique city, and even experience each of their cultures as you explore its neighbourhoods.

Your Guide To The City of Philadelphia – More Than Just Cheesesteaks

Team Parle has 1215 posts and counting. See all posts by Team Parle