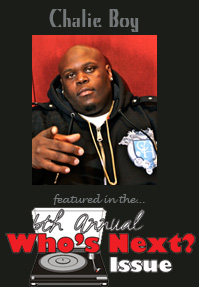 You could listen to his music, say its different, and mean it. You wont have any apprehensions about that assessment. It’s something about how he marries singing to rapping in a way that makes you think the two were made for each other. The fact that he is from Texas, (Hearne and Calvert to be exact) makes the southern twinge on his eloquent voice that much more out of the “box” the game seems to have itself in today. “I Look Good,” a single off of his I’m Here mixtape has swung his name from streets of Texas to now around the world, preparing all of us for something truly unique. Chalie Boy, 30, isn’t just a rapper, or a singer, but he is definitely a star on the rise. Take a look through Parle’s telescope…

Parlé: I know you repping Texas, what part are you from?
Chalie Boy: Hearne and Calvert, Texas. Its in the center of Texas, 3 hrs. From Houston, 3 from San Antonio, and 2 from Austin.

Parlé: What was your upbringing like?
Chalie Boy: Regular normal upbringing. I grew up in a rural area. I’m not from the city, but I grew up listening to all types of music and sang in a choir. My moms, helped me from the beginning, and told me a lot of things. She told me to stick to myself and be humble. She taught me about having understanding. With some of those lessons I learned in the industry everything isn’t always what its seems.

Parlé: Did you always want to be in music, or did you have other aspirations?
Chalie Boy: I was too short to play ball, 5’5″. I was into football, always had the ideas of what I wanted to do in life. I thought I’d have a chance to do something in music, it was a dream but it wasn’t a hundred percent. I knew I could sing, but didn’t force it.

Parlé: Who were some of your influences?
Chalie Boy: B.B. King, Bun B, T.I., Busta, Gerald Levert, Bebe and Cece Winans. My inspiration comes from all types of music, they like that churchy sound. That’s why people say its so soulful when they hear my music. I could rap about being fly, gangsta, living good, living it up. In the music of entertainment, I speak on what I see and it comes out how I feel it.

Parlé: How did your parents take it when you told them you were doing music?
Chalie Boy: They were all for it. My moms didn’t understand being a rapper, but she gave me the positive and negatives for it. My father just told me to be the best at whatever.

Parlé: So how did you get into recording music?
Chalie Boy: You know how people might be joking with their friends at high school, doing lame freestylin’ in the house. I seriously tried to put the music down when I met DJ Bull, CEO of Dirty 3rd Records in 2000. He asked me if I wanted to jump on a mixtape, and I gave it a go. Then he asked if I wanted to get on more freestyles.

Parlé: How many mixtapes would you say you’ve done so far, in your 10 years in the game?
Chalie Boy: Probably around 500 mixtapes, within Dirty 3rd records and features altogether, 500.

Parlé: As far as rapping goes, was it what you expected when you got your first taste of it?
Chalie Boy: Wasn’t what I expected ’cause I was rapping. I was literally a rookie when it came to rapping. I aint know how people would gravitate to it. People would listen to it and wanted to hear my verses. The fiirst year, I aint even tell ’em that it was me…if they aint like something on it, then I’d try to work on it. But regardless of what you can’t just whoop everyone ass. You deal with getting talked about; everyone aint gonna like it.