Skip to content
Home » Bun B – A Trill O.G.’s Thoughts On Hip-Hop 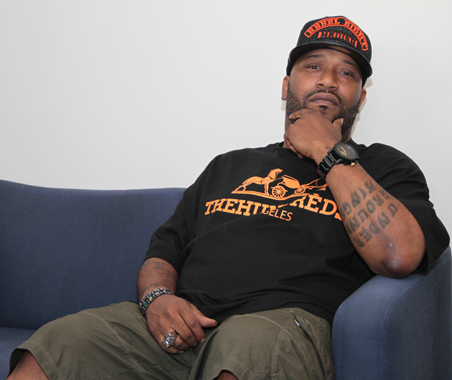 Rap legend Bun B from the legendary group UGK held a listening session at Universal Records. The rap artist is releasing his latest LP Trill O.G. on August 3rd.  The album features tracks with 2Pac, Pimp C, Drake, Slim Thug, Letoya Luckett, and several others. Parlé had a chance to speak with Bun B regarding the new album, Drake, Vh1 Hip Hop Honors and more.

Bun B is excited about the finished product and states, ” I gave it my all.” The MC is keeping this album age appropriate, but doesn’t criticize older rappers who target a younger audience. Bun B says, “People have to do what works for them, I respect it.” Still feeling the tragic loss of Pimp C, Bun B says ” I don’t have a favorite track, but I am partial to the song “Right Now” because it features 2Pac & Pimp C.” When asked if he would ever consider revising the group, he states “That would be disrespectful and there is no one who could ever replace Pimp C.”

In June Bun B attended the VH1 Hip-Hop Honors Dirty South edition. The acknowledgement from the network provided confirmation that the South has contributed a great deal to the current state of hip hop. With fans across the country and beyond Bun B is proud to be a part of such a legendary movement. Although many rap stars are voicing their discomfort of sectioning off the rap game. Bun B sees it as progress and advises others to get involved and “start creating awards shows so people can do it the way they want it done.” No matter how you view the current state of Hip-Hop there is no doubt that the south is making a huge impact.

Bun B has also made it clear that he is predicting a lot of success for new comer Drake, stating’ “Drake will go multiplatinum.” The rapper says that thanks to new online social networks people can hear good music for themselves instead of relying on critics or media outlets to give their opinion on an album, stating, “Bad music isn’t selling because now fans can listen to the album before they buy it. Good music will always sell.”

Music off the new album Trill O.G. can be heard on Bunbonline.com and Myspace.com/bunbofugk.