Skip to content
Home » Bryan J: Someone to Get Excited About in R & B 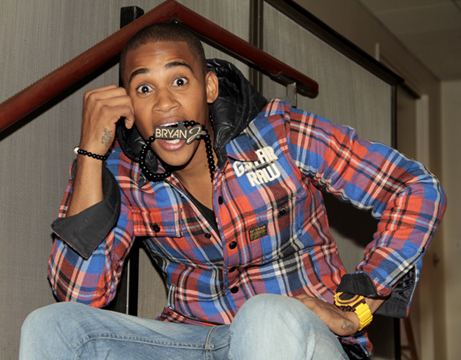 R&B Singer Bryan J is Someone To Get Excited About

Bryan J is the next big thing on the verge of making his mark on the world. Recently signed by RedZone Entertainment distributed by Island Def Jam, he’s the new kid on the block that flirts a lot. But Bryan J, is more than another young R & B star who croons for the ladies and is sure to make teenage girls lose their mind on BET’s 106 and Park. He has set his sights much higher than that and seeks to reach an audience of all ages and backgrounds. He caught the eyes and ears of many over the last couple of years covering tunes from artists like India.Arie to iconic musicians like Michael Jackson, but now he’s getting no sleep in the studio perfecting an album all his own. Parlé caught up with Bryan J to get a look into him much like a doctor sees inside a patient. Only we needed no stethoscope to hear his heartbeat or X–ray to see the way his bones are knit. He was candid as he talked about his love affair with music and women and gave us a glimpse into his future.

Parlé Magazine: How would you describe your style?
Bryan J:  My Style… I say my style is unique because I don’t try to dress like anybody.  I can see something that I like and want and I can see it on somebody in the store and I’ll be like I don’t want it because that person has it. I’ve always been the type of person that never wanted to wear what somebody else was wearing. I’ve always been a person that sets the trends where I’m from.

Parlé: What about your music? For someone who has never heard about you before, never heard a song and just wanted to know what type of music do you do? Is there anyone you can compare yourself to?
Bryan J: This is going to sound cliché but I would say if anything, I would compare myself to a young Usher just for the simple fact that the music is not so adult that the young kids cannot understand it.  I try to make sure that my concepts and the things that I talk about are things that anyone can relate to whether you’re eighty or you’re eight years old. (Laughs) Well maybe not so much eight, but you just want to make your music is for a huge crowd. You don’t want to limit yourself to one age group. You want to start from the lowest to the highest that you can go.  My music is definitely going to be fun. My music is basically a blueprint of my life. Things that I go through, things that I’ve lost, things that I’ve gained, things that I’ve loved.

Parlé: Ok. Who’s in your cd player right now?
Bryan J: The Dream’s Love King. That would be my disc one. Then in disc two, you got Usher, Versus.

Parlé: No female artists?
Bryan J: I rock with Keri and Alicia Keys. …umm…I’m trying to think of people that I really listen to because most of the time if I listen to a female, it’s going to be like Anita Baker.  Aretha.  I grew up listening to music like Marvin Gaye. I didn’t get a chance to listen to a lot of rap. I had the good ol’ R&B in my house.  So it’s like sometimes I tend to go back to. I get tired of listening to the music that’s playing now and I have to go back.

Parlé: Ok. So let’s talk about how this whole music thing came about for you?
Bryan J:  I started singing when I was six years old. I heard this song Jamie Foxx was singing when he was on tour and I’ve never in my life tried to sing. I just listened to music. And that night, I went home, and I was like I think I can sing. Never tried to sing before in my life. I was telling my brother I think I can sing. And he said nobody in the house can sing. What makes you think you can sing? I was like, I just feel it. So I actually got the song on CD and listened to it for 3 months straight. I said I’m going to try to sing this song one day. And I got my opportunity. We had a cookout at my grandmother’s place. I turned the song on and I was singing my heart out and my family said, you can sing. So my cousin actually plays the piano and he was the head of the choir at our church at the time. So I went to his house and the first song he taught me was “Ribbon in the Sky.”  And I would sing that song wherever I went. And I played sports so whenever I was at practice, I was singing. I became known around town as the kid that was always singing.  I found a passion for music at a very young age and that passion grew with me.  I had the opportunity to do a lot of great things with baseball. I traveled the word playing baseball but I always knew that music was what I felt like I was put on the earth to do. Baseball was something everyone else wanted me to do and I always told myself that when I had the opportunity to make my own decisions, I was going to pursue music.

Parlé: When did that time come for you?
Bryan J:  2006, was my freshman year of college. I met this guy who was friends with this guy that managed Johntá Austin, Sean Garrett, and Jarvis at the time. At school, [during lunch], one day I just ran and started singing…Then the next day I did it again, and the day after that, the entire school was there like “we’re waiting.”  It was a very small town so word got around and I started thinking, maybe I should make a career out of it. Pretty soon, the guy I met invited me to his house.  I sang for a producer named Shawn Hall and the next day I was in the studio at 6 in the morning recording my first song.  I didn’t know at the time he was a cousin of Tricky Stewart. Tricky Stewart [has worked with] Beyonce, Mariah, Rihanna, Whitney, the list goes on and on.  He had a lot going on and didn’t have time to put me in his schedule, but I’m glad I did wait that year and a half because I had a lot of time to mature as an artist and work on my craft, so when I did go back to Tricky, we had some wheels to roll on so we were good. That was basically how I got signed.

Parlé: So you compared yourself to a young Usher. But there’s also Chris Brown, Omarion…How do you plan to separate yourself and be your own person?
Bryan J:  I feel like the only way you can be like somebody is if you wake up and say “I wonder how Chris Brown would sing this song” or “I wonder how Omarion would dance to this song.” That’s when you jack everybody’s style. With me, I listen, but I don’t really pay attention to them. Every artist has a different story. I came from a small town. Chris Brown also came from a small town, but we had different values and listened to different music growing up.

Parlé: Have you found her yet?
Bryan J:  No. I’m single. They say you’re not supposed to look. You’re supposed to let it find you…A lot of women deal with dudes that are disrespectful and don’t treat them the way they’re supposed to be treated so they walk with this chip on their shoulder like all men are the same and that’s just not true. You can be forty years old and still be a kid. The age doesn’t make you a man. It’s the decisions that you make that make you a man.  Sometimes we carry this chip from the past into the present and we can’t allow ourselves to enjoy that because we‘re thinking all men or women are the same. Sometimes you can miss something that God sent for you all because you can’t get out of your own way to see it.

Parlé: Who are you working with on your new album?
Bryan J:  We have B. Cox (Bryan-Michael Cox). We have J.Que—he co-wrote Usher’s “Yeah,” Ciara’s “Like A Boy”. Britney Spears’ “Radar”, Omarion’s  “Icebox”. We have Rock City. We have The Dream, Shawn Hall.

Parlé: When can we expect your album?
Bryan J:   Top of next year

Parlé: Are you at all afraid getting into the business? You have veterans in this industry who talk about regrets and the bad side of the business. Tabloids, gossip columns, not knowing who real friends are. Do you think you can handle all of that?
Bryan J:   Of course I can handle it. That’s life. Life isn’t always peaches and cream. Whether it’s music or whatever it is that you’re doing, you’re going to always have a good and bad. It’s what you do when you get that bad that is really what counts.  Because when you’re doing good, everybody is on team Bryan J., but when you’re doing bad, those people who are still in your corner, those are the people you’re going to be able to rely on for life. You want to keep a small circle and keep people who want to see you win, want to see you succeed because at the end of the day whatever dream you’re trying to [achieve], there is always going to be someone helping you get to where you’re trying to go and if that person helping you wants to see you successful, that person will do whatever it takes and make the sacrifices to make sure that it happens.

Also Check Out:
Pretty Ricky – Consistency & Longevity in Hip-Hop and R & B
Donell Jones: Tenor Voice with a Laid Back Vibe
Dondria Nicole – The Reintroduction To The Singer