North Carolina spitter Driicky Graham makes his mixtape debut with Ya Gotta Start Somewhere, hosted by DJ Ill Will. Check out the tracklist and download the tape below…

Nasir Frederick Graham, also known by his rapper name, Driicky Graham, is an American rapper. He is currently 30 years old and was born on November 23, 1991, in Newark, New Jersey. At the age of seven, Driicky Graham moved with his mother in Oxford, North Carolina. At the age of three, Driicky made his first appearance in a music video to the Lords in the Underground single “Tic Toc.” This was his first time being exposed to the industry which later on inspired him to pursue a career in hip-hop.

Driicky started his rapping career at the age of 14, however, he did not view this as a serious career until he turned 18 where he signed to Nu World Era Music Group. Driickey started gaining success in 2012 with his single “Snapbacks & Tattoos” which led to many major record labels trying to sign him. Driicky then dropped his first mixtape on June 26, 2012 called, Ya Gotta Start Somewhere. He still continues to grow and is rapidly becoming more successful in the hip-hop industry. 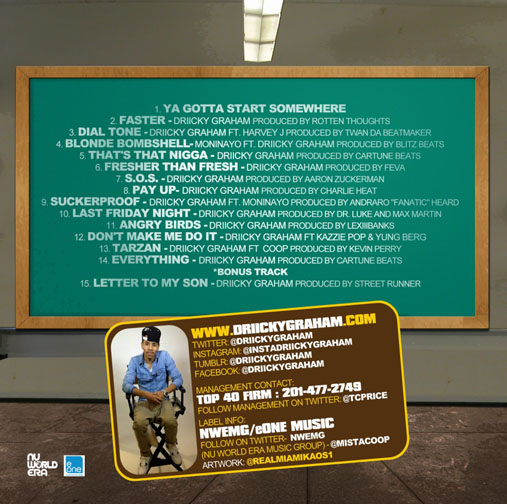